A third-party contractor will spray a designated area south of Eldorado Parkway and on both sides of Teel Parkway during evening and overnight hours for two days beginning Aug. 29. The neighborhoods to be sprayed include Shaddock Creek Estates, Country Club Ridge at the Trails, The Fairways, Heather Ridge Estates and The Trails of West Frisco.

The Cottonwood Creek Greenbelt is two miles of trails and wetlands east of Teel Parkway and north of Main Street. The treatment is slated to begin at 9 p.m. Aug. 29 and continue until 5 a.m. Aug. 30. The spraying will then repeat for the same hours Aug. 30-31. 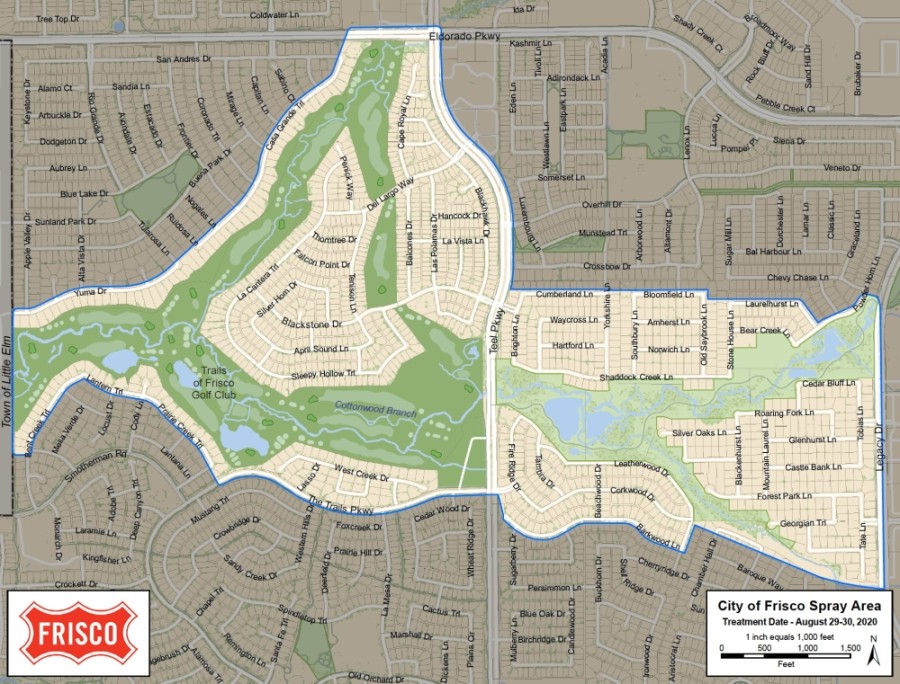 “Although not all mosquito species have the ability to transmit the disease, it just takes one bite from an infected mosquito to do so,” Environmental Health Supervisor Julie Fernandez said in a statement. “That is why it is important for people to drain any standing water around their homes to help ensure no potential breeding areas exist on their property.”
RELATED STORIES

• 'We just want to make sure that the availability is there': Dates added to free COVID-19 testing site in Frisco

Frisco began testing for mosquitoes May 1. The Cottonwood Creek Greenbelt area was also the location of the second positive test reported on June 5. Frisco then sprayed for mosquitoes in that area July 11-12, July 25-26, Aug. 1-2 and Aug. 8-10 after the fourth through seventh mosquito pools tested positive for West Nile virus.

The city confirmed the first positive test of a mosquito pool near Oakbrook Park along Hickory Street on May 29.

Additional information about Frisco's Mosquito Surveillance and Response Plan is available at www.friscotexas.gov/mosquitoes.
SHARE THIS STORY