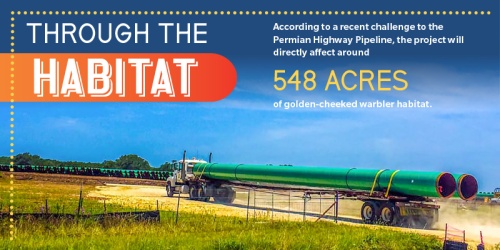 Local opponents of the Permian Highway pipeline have taken a second major legal action to try to push the company developing the project into conducting a full and public environmental review.

Hays County, Travis Audubon Society and several private plaintiffs filed a notice of intent July 17 to sue the U.S. Army Corps of Engineers, the U.S. Fish & Wildlife Service and Kinder Morgan. The challenge follows months of discussion among elected officials and residents over the impact that the proposed natural gas pipeline could have on the environmentally sensitive region.

“Basically the suit is saying: We need you to do an environmental impact study,” said Christy Esmahan, a Travis Audubon board member and chair of the advocacy committee.

The letter of intent, which must be filed at least 60 days before a lawsuit is brought under the federal Endangered Species Act, charges the company with trying to avoid one.

“Kinder Morgan is deliberately choosing to force a 42-inch petroleum pipeline through one of the most ecologically unique and diverse areas of the state of Texas, as opposed to avoiding expected impacts to endangered species and the Edwards Aquifer by following a more traditional route that would avoid these impacts,” the letter of intent reads. “If Kinder Morgan is going to stubbornly insist upon this route for whatever reason, it should be required to follow the correct legal process.”

In addition to filing a letter of intent, the Texas Real Estate Advocacy and Defense Coalition—the organization funding the legal action—announced in July that it would appeal a previous lawsuit in which Hays County was a plaintiff. That suit was dismissed by a Travis County state district judge in June, but Hays County commissioners voted at their July 16 meeting to support the appeal.  The first lawsuit, originally filed in April, focused on the lack of regulation around the exercise of eminent domain by private pipeline companies—a power that land use attorneys and other experts have said is extraordinarily difficult to challenge.

Even as eminent domain dominated conversations about legal challenges against the Permian Highway Pipeline in recent months, environmental issues have been at the heart of public opposition to the project in Central Texas since landowners first began receiving letters from Kinder Morgan last fall.

Local residents have repeatedly expressed concern about the potential effect of the pipeline on the Edwards Aquifer—a key source of drinking water for the region—as well as unique features of the aquifer that are are also a draw for tourists, such as Jacobs Well, and disruption of conservation land in the region.

“We have a great cause for concern,” said Ashley Waymouth, managing director of the Wimberley Valley Watershed Association, which is not directly involved in the suit but has been a part of the opposition to the pipeline since last fall. “This affects our aquifers, this affects our water supply, this affects our endangered species. We have a lot of things we have to be mindful of.”

Andrew Sansom, a well-known Texas conservationist and the former executive director of the Texas Parks & Wildlife Department, joined the first lawsuit as a plaintiff after learning the roughly 1,500-acre parcel of conservation land he manages—Hershey Ranch—would be bisected by the pipeline. Though he is not a party to the letter of intent, he supports its message.

“I think that what is most disturbing about this is that it would become an assault on one of the most iconic regions of our state in both its culture and its natural resources—those being the endangered species and the Edwards and Trinity aquifers,” Sansom told Community Impact Newspaper. “At the same time, it’s also going to be incredibly disruptive on one of the fastest-growing regions in the United States. And why they would have picked such a dual impact is just amazing to me.”

The golden-cheeked warbler—a small black bird with a yellow head is the federally listed endangered species at the center of the letter of intent, and one of the reasons that Travis Audubon joined the suit.
"It just seemed like it just went right along with what we need to do to protect this bird,” Esmahan said.

According to David P. Smith—a former deputy assistant secretary for fish, wildlife and parks at the U.S. Department of the Interior and the attorney who filed the notice of intent—the Permian Highway Pipeline will directly affect around 548 acres of habitat belonging to the golden-cheeked warbler and indirectly affect 2,355 acres.

Smith said this would clearly amount to what the federal government refers to as “take” of endangered species—defined as to “harass, harm, pursue, hunt, shoot, wound, kill, trap, capture or collect”—which must be specially permitted to avoid violating the ESA.

“I don’t think anyone is debating whether or not take is going to occur  with the golden-cheeked warbler based on the amount of occupied habitat that’s going to be impacted,” Smith told Community Impact Newspaper.

The letter of intent charges that the permitting process Kinder Morgan is pursuing “is a thinly veiled attempt to avoid obtaining the necessary federal permits to allow them to lawfully ‘take’ federally listed endangered species.” It goes on: “[I]t is obvious that Kinder Morgan is deliberately attempting to hide the true effects of the [pipeline] on the human and natural environment by failing to obtain the necessary permits to comply with federal law in an effort to avoid conducting a full and necessary review of the project.”

Though the Permian Highway Pipeline never crosses outside of Texas, there are still federal permits Kinder Morgan can and in some cases must obtain. The company is required, for example, to have permission from the Corps for any crossing of waterways, of which there are many over the pipeline’s 430-mile path from the Permian Basin to the Gulf Coast.

That permission can come in one of two forms. The first option is a general nationwide permit, which the Corps issues every few years and are not project-specific. But according to the Corps, not all projects qualify for nationwide permits, including those that “would have more than minimal individual or cumulative net adverse impacts on the environment, or may be contrary to the public interest.”

The letter of intent argues that the Permian Highway Pipeline will have much more than a minimal impact on the environment, and therefore that Kinder Morgan must pursue the second option for permission from the Corps:  an individual permit under Section 404 of the Clean Water Act.

With either type of permit, if the pipeline remains on the same route, the Corps will have to consult with the U.S. Fish & Wildlife Service under Section 7 of the ESA. In turn, the USFW will have to produce a biological opinion and what it calls an incidental take statement, or ITS, which quantifies the damage that could be done to the species.

But, Smith said, neither the biological opinion nor ITS actually give Kinder Morgan permission for incidental take of the golden-cheeked warbler. Those items must be incorporated into the Corps permit.

Even if those elements are incorporated into the Corps permit, however, the issue of jurisdiction may remain. The nationwide permit—and in some cases an individual permit—is applied only to the area of the project that crosses a waterway under Corps jurisdiction, which Smith estimates would be 2%-3% of the project as a whole.

Or, as the letter of intent states, in that case “Kinder Morgan will have no legal coverage for incidental take of listed endangered species resulting from the construction, operation and maintenance of the PHP for over 95% of its route.”

The letter of intent to sue outlines three options that the federal agencies and Kinder Morgan can take to avoid a lawsuit. First, Kinder Morgan can apply for an individual Corps permit to cover the whole project, which would require a full and public environmental review, and consult with the USFW and then incorporate the biological opinion and ITS into the permit. Second, Kinder Morgan can proceed with nationwide permitting but also apply separately to the USFW for what is known under the ESA as a Section 10(a)(1)(B) Incidental Take Permit, which also requires a full environmental impact statement, including public notice and public comment.

“We’re just hoping to get some answers on how [Kinder Morgan] will mitigate the environmental impacts that they will create in Hays County,” Hays County Commissioner Lon Shell said.

The third option offered by the letter of intent is to move the pipeline “to an alternative route that would avoid substantial adverse impacts to federally listed endangered species and the Edwards Aquifer.”

Kinder Morgan sent Community Impact Newspaper a written statement from Vice President of Public Affairs Allen Fore, responding to both the appeal of the first lawsuit and the filing of the letter of intent.

“We feel confident that the Travis County District Court ruled in accordance with settled law, and we continue to work with all stakeholders, including state and federal regulators, as we complete the Permian Highway Pipeline Project,” the statement reads.  “We are also complying with all applicable laws related to endangered species along the pipeline route.”


A matter of process

The first lawsuit Hays County joined to challenge the Permian Highway Pipeline was essentially about public process and transparency, charging that when it came to the exercise of eminent domain by private pipeline companies, the “[Texas] Railroad Commission conducts no investigation, evaluates no alternative route, entertains no adversarial inquiry, provides no notice, allows no hearing, and considers no evidence.”

The second suit levels a similar challenge at federal agencies, should Kinder Morgan be allowed to proceed with only nationwide permits, stating the use of those permits is the company’s “effort to avoid fully analyzing the impacts of its project on the human and natural environment, disclosing those impacts to the public or to elected officials, or allowing any sort of public comment on the environmental effects of their project.”

In a third legal action related to the Permian Highway Pipeline, Kinder Morgan has sued the city of Kyle over a municipal ordinance that mandates additional steps from companies building pipelines in the city and the developers that build near them. The company charges that Kyle—which is a plaintiff of the eminent domain lawsuit—has overstepped its authority.

The difference between what is required of private companies and what is required of the government in terms of both the use of eminent domain and the evaluation of environmental impacts has been raised often by local elected officials and pipeline opponents.

“If the county were going to build a road along the route that they have chosen to build their pipeline we would be doing a more thorough environmental impact analysis,” Shell said.

By the end of the 60-day period after the letter of intent is filed, Smith said he hopes the federal agencies in charge of permitting and Kinder Morgan will have taken action to avoid a lawsuit.

“Our hope would be that Kinder Morgan would have a conversation with the Fish & Wildlife Service and with the Corps and decide to do the sensible thing and get full coverage for their endangered species impacts,” he said.

If not, a second suit will ask that the private pipeline companies be required to complete a similar process as government agencies disrupting an endangered species' habitat.

“Hays County is like, ’Hey, every time we do some sort of major infrastructure projects, we’re doing a very public review,” Smith said. “And so we think Kinder Morgan should too. As a matter of law, we agree.”
SHARE THIS STORY