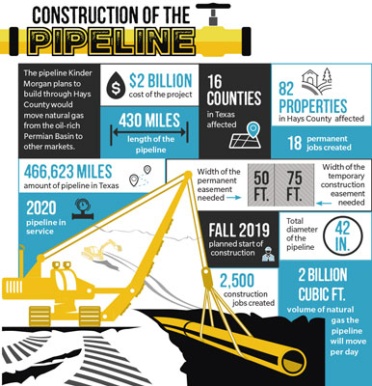 More than 80 Hays County landowners—and hundreds more across the Hill Country—either have already or will soon be contacted by Kinder Morgan, Inc., one of the largest energy infrastructure companies on the continent, asking for permission to survey their property to build a natural gas pipeline.

But the company only sort of has to ask.

“They have the right to come onto your land,” said Bill Johnson, who received one of these phone calls from Kinder Morgan. “They can survey, and they can build their pipeline, basically.”

Johnson is sole owner of the 1,100-acre 6F Ranch, which fronts FM 150 in the Kyle extraterritorial jurisdiction, and part-owner with his older sisters of the adjacent roughly 2,700-acre Halifax Ranch, which runs along the bank of the Blanco River. The proposed pipeline is routed through part of Halifax and for almost 2 miles through the middle of 6F.

“In this area you’ve got the recharge zone from the aquifer,” Johnson said. “We have some of that on our property. You’ve got golden-cheeked warbler habitat—that’s an endangered species.”

Johnson opposes the project, but that may not mean it can be stopped. Kinder Morgan, under Texas law, may take part of Johnson’s land to build the pipeline as long as certain conditions are met and he is fairly compensated.

The Permian Highway Pipeline will be a $2 billion, 430-mile project stretching from the Waha natural gas pipeline junction, about 40 miles northwest of Fort Stockton, to markets on the Gulf Coast.

Waha is in the Permian Basin, which is the largest petroleum-producing  region in the U.S. When companies drill for oil, natural gas is also extracted, which has made the Permian a major gas market.

But there is not enough pipeline capacity to move natural gas away from the Permian and to customers, which has caused a drop in price of the gas from Waha, according to the U.S. Energy Information Administration.

And there is another problem with the lack of pipeline capacity.

“If you don’t have a system to take away the natural gas, it’s flared,” said Allen Fore, vice president of public affairs at Kinder Morgan, referring to the process by which natural gas is burned off. “It’s wasted.”

According to a July report from Drilling Info, an Austin-based provider of information to the oil and gas industry, flaring rates in the first quarter of 2018 were four times higher in 2010.

The pipeline will affect 16 counties in Texas, including Hays. Because negotiations are ongoing, Kinder Morgan has released only a relatively inexact map of the pipeline route, but it does show a path crossing into Hays from Caldwell County just south of Uhland, passing close to the city limits of Kyle, running parallel to FM 150 before heading west past Wimberley.

In Texas, a provision in the state constitution under Article 1, Section 17 allows for a person’s property to be “taken, damaged, or destroyed for or applied to public use” as long as “adequate compensation” is made and the “ownership, use, and enjoyment of the property” is by the state or by “an entity granted the power of eminent domain under law.”

In an interview several partners from the law firm Barron, Adler, Clough & Oddo, who are attending landowner meetings across the region and representing some of those affected by the pipeline, said that the interpretation of that section by the Legislature has in many cases given pipeline companies the power of eminent domain.

“It’s a power ultimately of the government,” said Nick Laurent, a partner at the firm, which has offices in Austin and Houston. “The Texas Legislature has delegated that power to pipeline companies provided they meet certain conditions, which are not very onerous.”

Private companies having the ability to condemn private land dates back to the railroad companies of the 1800s, which were considered “common carriers” undertaking projects for the public benefit.

Luke Ellis, an eminent domain attorney who spoke at a meeting of landowners in Fredericksburg Nov. 26, said not everyone agrees that projects by private companies should fall into the category of common carrier.

“A lot of my clients question,” Ellis said to those assembled, “whether this is a public project.”

But Fore said with a project such as this, Kinder Morgan is considered a common carrier because it has multiple customers for the pipeline and considers it open-access to other companies that may be interested.

In terms of public benefit, Fore also referenced the company’s contribution to the economy and its role in  domestic energy policy.

“From a public policy perspective these projects are good and important,” Fore said.

There are 466,623 miles of pipeline in the state, according to the Railroad Commission of Texas, which regulates oil and gas industry in the state, but not much of it runs through Hays County.

Hays County Commissioner Lon Shell, whose Precinct 3 includes most of the southern half of Hays County west of San Marcos, would prefer it stay that way. Shell once worked in the oil and gas industry; he is not opposed to development of natural resources in Texas, but he does not want this pipeline for his constituents.

David Baker, executive director of the environmental-advocacy organization Wimberley Valley Watershed Association, hopes to be able to convince Kinder Morgan to move the pipeline to an alternate route that would run south of San Antonio, paralleling Hwy. 90.

“When I look at what this potentially could do to impact our local resources here, it’s very scary because these are very sensitive watersheds,” Baker said.

He believes there is an economic argument in addition to an environmental one, noting that on the map provided by Kinder Morgan the pipeline runs right by Jacob’s Well.

“That’s the basis of our main economy,” Baker said. “People coming to see these beautiful water features and these heritage lands up there is where this water gets recharged in the aquifer.”

Similar arguments were made in Fredericksburg, where vineyards and agricultural fuel the economy.

But challenging a pipeline legally on environmental grounds is not easy, in part because as an intrastate project by a private company, federal environmental regulations may not apply, regardless of the golden-cheeked warbler.

“It would be very difficult for it to be stopped for any endangered species issues,” said Patrick Reznick, a Wimberley-based land-use lawyer who represents Johnson as well as other local landowners.


HOW IT WORKS FOR THE LANDOWNER

The process of becoming a part of a pipeline, for many landowners,  begins with a request to survey the property. Most of the landowners in Hays County whose land Kinder Morgan may need to build the pipeline on its planned route have been notified, but it is hard to tell from the map the company released exactly who those people may be.

That is by design, Fore said, because the company begins by surveying a corridor of land that is 600 feet wide for features of environmental and cultural significance before deciding on a route that will include a 50-foot permanent easement for the pipeline and a 75-foot temporary easement for construction.

“We make hundreds of routing variations based upon landowner input,” Fore said. “And we’ll do that on this project undoubtedly.”

Once the surveying is done, the company will make an initial offer, at which time negotiations begin.

There are two things to negotiate: the first is the easement terms, which govern access to the property and may include anything from the size of the pipeline to a specific tree a landowner wants the route to avoid; the second is the compensation, which is both for the loss of the land the company takes with a permanent easement and for the damage to the value of the remaining property that the pipeline can cause.

“If they deposited that amount they can come on and build the project  even though somebody’s objected,” said Roy Brandys, a partner at Barron Adler.

If it is protested, the case then goes back to court and proceeds like a regular civil case, but the jury cannot know what the commission’s valuation was.

What is harder is to challenge the right of the company to take the land in the first place. Lawyers at Barron Adler were careful to say that in this particular case, whether or not the company has a right to take land by eminent domain has yet to be established.


THE COMPANY COMES TO TOWN

“I’m hoping from my initial conversation that [the company] understands that this is going to be one of those places where they’re going to have to work to accommodate as many concerns as there are,” Shell said.

And Kinder Morgan may try. In addition to returning in January to present to the full Commissioners Court, Fore said the company will hold open houses in several towns.

But those involved in the building of the pipeline should not necessarily expect to be welcomed.

“They’re going to encounter a lot of opposition, including some very wealthy landowners who have resources and lawyers,” Johnson said.

The question remains of what can actually change. Negotiations over the Permian Highway Pipeline are at an early stage, but the company’s timeline is short, with construction slated to begin fall in 2019. The company hopes to have the pipeline active by the fourth quarter of 2020.

“My estimate is we’ve got about 60 to 90 days to turn this thing,” Baker said. “I’m under no illusion that we’re up against a giant.”