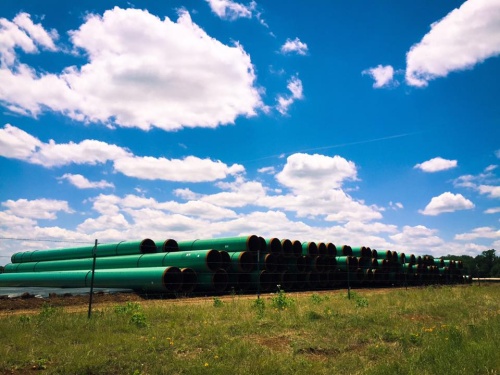 Materials for the Permian Highway Pipeline are stacked in Blanco County.

Hays County is taking a second legal action related to the Permian Highway Pipeline—and not giving up on the first.

Commissioners voted July 16 to join the Travis Audubon Society and several private plaintiffs in filing a notice of intent to sue the U.S. Army Corps of Engineers, the U.S. Fish and Wildlife Service and Kinder Morgan—the company developing the project—in relation to the planned natural gas pipeline’s potential disruption of endangered species habitat.

At the same meeting, the court agreed to support the appeal of its previous lawsuit against the Texas Railroad Commission, which takes issue with the public process around oil and gas pipelines and was recently dismissed in Travis County District Court.

The new legal action—a notice of intent to sue must be filed 60 days before a lawsuit can be formally brought over the Endangered Species Act—in response to the 430-mile, 42-inch natural gas conduit cites what it refers to as Kinder Morgan’s “thinly-veiled attempt to avoid obtaining the necessary federal permits” that allow it to pass through habitat belonging to the golden-cheeked warbler, a federally protected endangered species.

A release from the Texas Real Estate Advocacy and Defense, or TREAD, Coalition, which is funding both challenges to the pipeline, states that plaintiffs in the new lawsuit are asking for a full environmental impact study under the National Environmental Policy Act, or NEPA, and that Kinder Morgan is attempting to avoid a full study by signing onto existing permits.

According to David P. Smith, the lawyer filing the intent to sue, the Permian Highway Pipeline will directly impact around 548 acres of habitat belonging to the golden-cheeked warbler and indirectly impact 2,355 acres.

Environmental issues have been at the forefront of the controversy around the Permian Highway Pipeline since news of the project first began emerging last fall. Hays County public officials and residents have raised concern over the pipeline’s proximity to the Edwards Aquifer, conservation land and endangered species if it is built along the planned route.

At the July 16 meeting, Commissioner Lon Shell said he worries that a gas pipeline could disrupt environmentally sensitive areas of Hays County.


“We do have concerns with this pipeline’s path and the habitat that it will affect within Hays County and are concerned about the plans—or the lack of plans—to mitigate those impacts,”  Shell said.

The TREAD Coalition statement draws parallels between the first legal challenge and the second, stating that “[b]oth lawsuits highlight the glaring need for a real oil and gas pipeline routing process in Texas” and “plaintiffs from both suits believe that this lack of transparency denies Texans the process its constitution requires and in doing so, puts at risk the health, safety and economy of its citizens across the state.”

As for the appeal to the suit against the railroad commission, plaintiff Andrew Sansom—a well-known Texas conservationist and former executive director of the Texas Parks and Wildlife Department—said in an interview that there may be additional land conservation organizations signing on.

“The appeal seems to be gathering additional momentum,” Sansom said. “As knowledge of this issue grows, then more and more people want to become involved.”

In a statement sent to Community Impact Newspaper July 17, Kinder Morgan Vice President of Public Affairs Allen Fore said, "We feel confident that the Travis County District Court ruled in accordance with settled law, and we continue to work with all stakeholders, including state and federal regulators, as we complete the Permian Highway Pipeline Project.  We are also complying with all applicable laws related to endangered species along the pipeline route."

Editor's note: This article has been updated.
SHARE THIS STORY