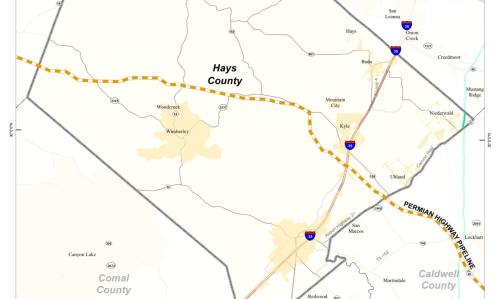 After several weeks of deliberation, Judge Lora Livingston of the 261st District Court in Travis County released a ruling June 25 dismissing claims in a lawsuit brought against the Texas Railroad Commission, the state agency in charge of permitting oil and gas pipelines.

Plaintiffs in the Permian Highway Pipeline-related case—a group that includes several landowners, Hays County and the city of Kyle—asked for a moratorium on the use of eminent domain by private pipeline companies until a more rigorous public process with greater transparency could be put in place.

Though the suit did not directly challenge the right of those companies to use eminent domain—an authority of the state outlined in the constitution and delegated to those companies by the state Legislature—it did charge that there is so little oversight and regulation of the routing of those pipelines by the Texas Railroad Commission that it is a violation of the Texas Constitution.

Livingston stated that she was concerned with how little is required of private companies that exercise eminent domain, but she believes it is ultimately not the place of the court to make those changes.

“The court is concerned with a power that, when exercised by a governmental entity, must be done in the harsh light of public scrutiny of open meetings and public notice, but, when exercised by a private entity, may be determined without public notice by a select few driven primarily by their financial interests,” Livingston wrote. “However, the court must also be conscious of its role to apply the law and not to dictate the policy of the state.”

The Permian Highway Pipeline is a 430-mile conduit for natural gas that, as planned, will run from the Permian Basin to the Gulf Coast, bisecting Hays County, among others, on its way. Since plans for the pipeline were made public, local opposition has become widespread, leading numerous jurisdictions—including Hays County, San Marcos, Kyle, Buda, Woodcreek, Wimberley, the Barton Springs-Edwards Aquifer Conservation District, and Hays CISD—to pass resolutions opposing the pipeline and asking the Legislature to take action against it and similar projects.

Kinder Morgan, which was named as a codefendent in the suit, issued a release attributed to Tom Martin, president of natural gas pipelines for the company applauding the ruling.

“The court’s finding validates the process established in Texas for the development of natural gas utility projects, as well as the steps we have taken to comply with that process,” Martin said in the statement.

The lawsuit was funded by members of the Texas Real Estate Advocacy and Defense, or TREAD Coalition—a bipartisan nonprofit concerned with property rights, among other issues—which issued a statement June 25 expressing disappointment in the ruling and stating that the organization may consider an appeal.

“We continue to believe the Texas constitution does not allow for the delegation of this awesome power to a private company without oversight,” the statement reads. “This issue should be heard by an appellate court. We are weighing our options for an appeal and planning additional legal actions in other venues to challenge this severely problematic route.”