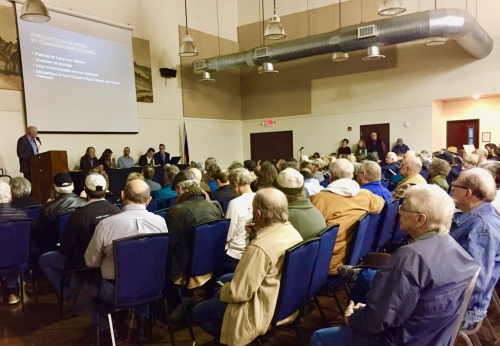 By the time the community meeting on the natural gas pipeline Kinder Morgan plans to build through Hays County began at the Wimberley Community Center on Jan. 29, the large majority of the roughly 280 chairs were filled, and dozens of people stood around the perimeter of the room.

The meeting was organized by Hays County Commissioner Lon Shell.

“This is an important project,” he told the assembled crowd. “Our groundwater, our environment is the lifeblood of this county—we are extremely concerned about that.”

The Permian Highway Pipeline will be a $2 billion, 430-mile project stretching from the Waha natural gas pipeline junction to markets on the Gulf Coast. Sixteen counties will be affected, including Hays; a preliminary map of the pipeline route shows a path running between Kyle and San Marcos, then just north of Wimberley.


Panelists at the Jan. 29 meeting included Lucy Johnson, the former mayor of Kyle, whose family owns land that will be affected by the pipeline; Hays County General Counsel Mark Kennedy; David Baker of the Wimberley Valley Watershed Association; Jeff Mundy, an Austin-based attorney; and Matt Lara, vice president of the Hill Country Alliance.

Allen Fore, Kinder Morgan vice president for public affairs, was also at the meeting but did not speak.

Johnson spoke about her concerns for both landowner rights and the environment.

Though Kinder Morgan is still in negotiations with landowners over the Permian Highway Pipeline, companies that build pipelines for oil and gas have historically been allowed to take private land under eminent domain as long as the landowners are fairly compensated.

Opposition to the pipeline is growing, but whether it can actually be stopped is unclear. Newly elected state Rep. Erin Zwiener, D-Driftwood, told Community Impact Newspaper in December that essentially the only tool available to fight pipelines is the power of persuasion.

Speaking at the meeting in Wimberley, Zwiener said there are few rules for how pipeline companies communicate with the public.

“I hope you all know that this meeting tonight didn’t have to happen," Zwiener said. "There is no legal requirement for a public meeting when a common carrier pipeline is establishing a route and using eminent domain against the landowners of Texas.”

Zwiener said regulations around pipeline companies have been a topic of conversation in the Legislature.

“I can tell you that there is interest across party lines, across geographic areas of Texas in the fact that landowners and communities are being ignored and steamrolled without due process and without public accountability," she said. "I want you to know that we are talking about this.”

“What frustrates me the most is the process," Romans said. "The process for getting community voices, landowner voices heard and represented fairly in determining how these projects come into our community."


Various other current and former Hays County officials attended the meeting, including Kyle City Council Member Dex Elison; former Hays County Commissioner Will Conley; and Jimmy Alan Hall, who ran for the Precinct 3 county commissioner seat but lost to Lon Shell—though in December he challenged the results in court.

County officials collected written comments and questions that Shell said he will give to Kinder Morgan.

Shell reminded attendees that Kinder Morgan's first community meeting in Hays County on the Permian Highway Pipeline will take place Feb. 12 at the Wimberley Community Center; there will be a second meeting the following evening in Kyle.

“At that time I’m hoping we will have all of these type of concerns laid out,” Shell said. “Let’s look forward to that and try to prepare ourselves for that day.”