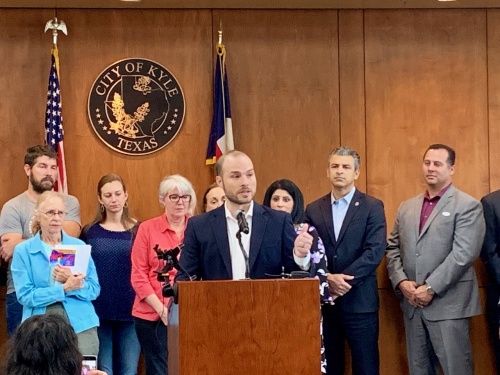 A coalition of landowners, joined by Hays County and the city of Kyle, filed a lawsuit in the Travis County state District Court on April 22 to at least temporarily halt eminent domain proceedings in relation to the planned Permian Highway Pipeline.

The suit names as defendants both Kinder Morgan, the company developing the 430-mile natural gas pipeline, and the Texas Railroad Commission, the state agency in charge of permitting oil and gas pipelines.

“We are asking for the court to enter a declaration that the Railroad Commission’s current process of approving pipeline applications is unconstitutional,” said Clark Richards of Richards, Rodriguez & Skeith, the law firm representing the plaintiffs, at the press conference announcing the suit. “We are asking the court to enjoin Kinder Morgan from proceeding with eminent domain proceedings until a constitutionally permissible form of application process exists and has been applied to this pipeline.”

Oil and gas pipeline companies in Texas historically have been afforded the power of eminent domain, which means as long as landowners are compensated, their land can be taken even if they do not want to sell it. That authority—stemming from a provision in the state constitution and delegated by the Legislature—dates back to the building of the railroads, which were considered “common carriers” undertaking projects for the public benefit.

Public officials and landowners have objected not only to the fact that the oil and gas companies can use eminent domain but also that they can do so without any kind of public process.

“[Pipeline companies] don’t have to justify or explain their decision to any higher authority,” said Lana Nance, a plaintiff in the lawsuit whose Hays County property is in the proposed route of the pipeline. “We hope that the result will be the formation of a way to participate in the process.”

The lawsuit is funded by the Texas Real Estate Advocacy and Defense Coalition, an organization founded last fall around the time the Permian Highway Pipeline became a major issue, though it includes other issues in its mission.

“As an elected official, when the community disagrees with me, they show up and let me know, and they have many ways to remedy their disagreements with me,” Mitchell said. “Kinder Morgan has 420 miles of power to take people's land, and they are not held accountable by anyone in this room.”