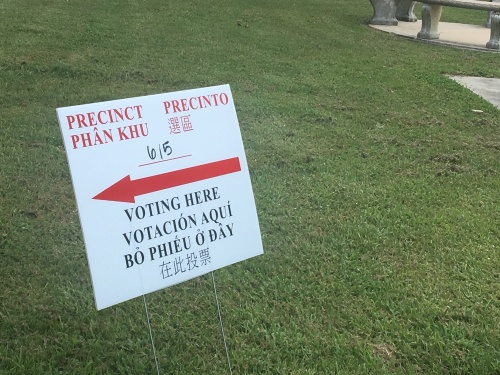 With 91 percent of precincts reporting, 85.68 percent of voters, or 126,800, were in favor of the bond proposition. A total of 21,197, or 14.32 percent, opposed it. A total of 6.5 percent of the county's registered voters participated in the election. All results are unofficial until canvassed.

As of 9:52 p.m., 5.82 percent of the county’s 2,285,881 registered voters had participated in the election. All results are unofficial until canvassed.

Joe Stinebaker, director of communications for Judge Ed Emmett’s office, said as results rolled in that Emmett thanked the voters for apparently passing the referendum by such a large margin.

“He thought it sent a very clear message to the people of Harris County, to the government of the state of Texas and United States that the people of Harris County were going to step up and take care of their share of the recovery, and that he hoped that our state officials and our federal officials would now step up and help us by providing the money and the expertise that we’re going to need over the next few years,” Stinebaker said.

Stinebaker said the next step will be for the Harris County Budget Office to begin working on the first wave of projects.

Harris County Flood Control District issued a statement Saturday night declaring victory for the proposition, which will provide funds for HCFCD projects for the next 15 years.

“We are very excited that the voters have significantly enhanced the flood control district’s ability to address the flooding issues that impact Harris County by approving the issuance of up to $2.5 billion in bonds to help us implement more flood risk reduction projects in a shorter timeframe,” HCFCD Executive Director Russ Poppe said in a statement.

HCFCD Director of Operations Matthew Zeve said Saturday night that HCFCD will continue to hold community meetings like those it held over the summer in the county’s 23 watersheds as the projects begin to take shape.

“The flood control district has a community meeting at least one for every project that we do, so we’ll be back out there in those areas that projects will effect.,” Zeve said.

Zeve echoed Poppe’s thanks to voters for supporting the measure.

“We really thank the citizens for putting their trust [in us] and believing that we can execute this bond program," Zeve said. "And from me personally, I plan to work hard over the next 10-15 years to deliver everything.”

Polls closed at 7 p.m. in the Harris County bond referendum asking voters to approve $2.5 billion for Harris County Flood Control District projects over the next 15 years.

To learn more about the expected effects of the referendum on property taxes, visit our guide to the potential effect on tax bills. The guide answers some frequently asked questions about the cost to the average homeowner and changes to the property tax rate.

The full list of bond projects can be viewed at the Harris County Flood Control District website.

Here is a breakdown of projects planned in Harris County by region: