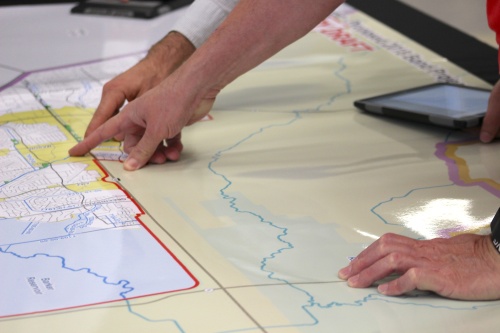 The total cost of the finalized projects that concern the Katy area in the Barker and Addicks reservoir watersheds total $449,840,000, according to HCFCD documents.

After nearly three months of community meetings, the Harris County Flood District on Aug. 6 released its finalized list of flood control projects for the $2.5 billion bond referendum that voters will decide on Aug. 25, on the one-year anniversary of Hurricane Harvey.

The total cost of the finalized projects that concern the Katy area in the Barker and Addicks reservoir watersheds total $449,840,000, according to HCFCD documents.

Of the finalized projects for the Addicks reservoir watershed, seven projects totaling $126 million would be funded solely with local money if the bond referendum is passed, according to HCFCD documents. Eight more proposed partnership projects totaling $163.7 million would be funded through the HCFCD and the federal government, according to HCFCD documents.

Officials said some of the most critical projects included in both reservoirs are funding for a $750,000 feasibility study required by Congress and the Army Corps of Engineers for any modification to the Addicks and Barker reservoirs, and $30 million to desilt the 17 channels that lead into each reservoir.

Two more projects for the Addicks reservoir include $83.7 million for multiple subdivision drainage improvement projects and $30.8 million for several storm repair projects throughout the entire watershed.

Early voting for the bond starts Aug. 8 and runs through Aug. 21. Find out where to vote and important information about the bond here.