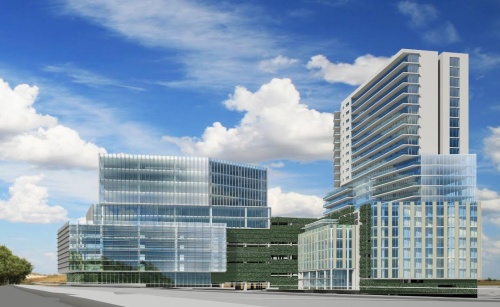 The North Gateway Plaza will be located at 10615 Burnet Road on a strip of undeveloped land adjacent to the McKalla Place site being eyed by Precourt Sports Ventures to build a new Major League Soccer stadium.

“The Burnet [Road] corridor is experiencing exciting new developments,” Capella Managing Partner Neil Francois said in a news release. “Our team is thrilled to be participating in this growth and very proud of our high-quality North Gateway Plaza project. It will be the crown jewel in our portfolio.”

Retail options in the office building are expected to include boutiques, cafes and service providers, according to Capella.

A ground breaking is expected in early 2019, and Capella anticipates completing the $250 million plaza in 2021.

Because the project complies with its existing zoning, no zoning changes are needed, according to Capella. Page Southerland Architects designed the buildings, and Kimley Horn and Associates Inc. is the engineering firm.

Capella was formed in 2011 and developed the River Place Medical building off RM 2222. The company reports the North Gateway Plaza will be its largest development to date.

The area adjacent to The Domain is part of the North Burnet/Gateway master plan that includes its own zoning code designed to encourage a more walkable and vibrant area, according to the city of Austin.

Nearby residents are also keeping an eye on recent developments, including Francoise Luca, president of the Gracywoods Neighborhood Association, located east of the site.

“[North Gateway Plaza] is the last undeveloped piece around the McKalla site,” she said. “That is going to change the dynamics of how the McKalla site will get developed.”

Besides North Gateway Plaza and the MLS stadium, other recent developments include two apartment complexes under construction nearby and the proposed redevelopment of the IBM Broadmoor Campus that Austin City Council is slated to make a final vote on the zoning change June 14.

City Council is slated to receive June 1 an economic analysis of a soccer stadium at the McKalla site.

Although the Broadmoor redevelopment has the support of nearby residents, others are concerned about traffic congestion that a stadium could bring.

Editor's note: This story was updated to correct the number of floors in both the multifamily and office buildings. Initial information provided did not include parking in the overall total number of floors.