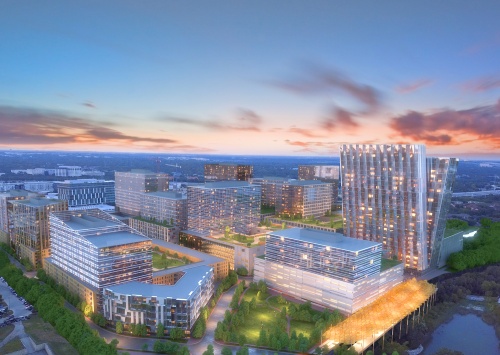 The redevelopment of the IBM Broadmoor Campus includes at least 2,000 housing units, building heights of 360 feet and a new Capital Metro Rail Station.

The proposed high-intensity, mixed-use redevelopment of the IBM Broadmoor Campus in North Austin is scheduled for a final City Council vote on Thursday; however, the vote will be postponed until June 14, according to city sources.

The planned 20-year transformation of the 66-acre campus at 11501 Burnet Road—primarily occupied by technology giant IBM since 1991—is headed by Brandywine Realty Trust LLC. The planned mixed-use development will include at least 2,000 housing units, building heights up to 360 feet and a Capital Metro rail station—a relocation of the existing Kramer Lane station.

For the project to move forward, City Council needs to approve a rezoning of the tract. The zoning change received an initial thumbs up from council members on April 12. However, city staff is still reviewing legal documents related to the case, said Sherri Sirwaitis from the city’s Planning and Zoning Department.

Sirwaitis also said the developer has not yet surrendered ownership of 70 feet of the tract to the city—a key part of the deal. Sirwaitis said the 70 feet are crucial to the transportation department's planned width expansion of Burnet Road in the future.

If approved as is, the project will receive major entitlements—a doubling in maximum building height from 180 feet to 360 feet and an 80 percent impervious cover limit. In exchange, potentially 50 percent of the 2,000 housing units will be offered as affordable and the developer is expected to dedicate triple the required parkland, protect all heritage trees and remove 15 acres of asphalt.

In April, District 7 Council Member Leslie Pool complimented the developer for the project and their work with the community.

“Brandywine’s work with the community helped make this a truly beneficial project for everyone,” Pool said at a City Council work session in April. “It’s a model for how community conversations and collaboration fosters better planning, better projects and overall goodwill.”

City Council is expected to take a final vote on the project at its next regular meeting on Thursday, June 14.