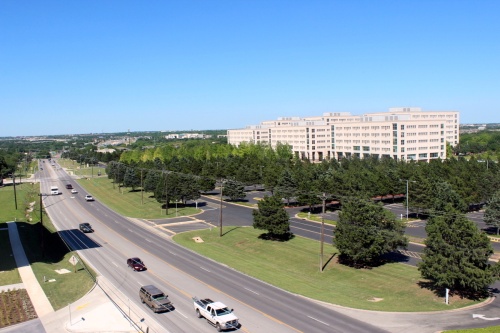 The IBM Broadmoor Campus had been occupied by IBM since the campus's construction in 1991.

A high-intensity, mixed-use redevelopment of the IBM Broadmoor Campus in North Austin is poised for final approval by Austin City Council following an initial thumbs up at the April 12 City Council meeting.

IBM has occupied the roughly 66-acre tract at 11501 Burnet Road since the campus’s development in 1991. Future plans for the campus include a mixed-use development with a new Capital Metro Rail Station, at least 2,000 housing units and building heights of up to 360 feet.

The plan has the full support of the nearby Gracywoods Neighborhood Association, and the zoning change request that would allow the development to double its height earned first-reading approval from Austin City Council on April 12. City Council will conduct a public hearing before the final two readings of the zoning change sometime around May.

Developer Brandywine Realty LLC developed the 20-year phased plan for the project through collaboration and communication with the surrounding community, according to District 7 Council Member Leslie Pool.

“Brandywine’s work with the community helped make this a truly beneficial project for everyone,” Pool said at a City Council work session in April. “It’s a model for how community conversations and collaboration fosters better planning, better projects and overall goodwill.”

The project includes a relocation of the Kramer Metro Rail Station from Kramer Lane onto the Broadmoor Campus. Over 400 parking spaces will be developed for Metro Rail riders. Capital Metro supported the move, and Brandywine Realty has committed to paying for the relocation, according to city documents.

Pool said in exchange for the entitlements included with the zoning change—the building height increase from 180 feet to 360 feet and the 80 percent impervious cover limit—Brandywine Realty is working with the city on potentially offering 50 percent of the 2,000 units at affordable rates. They also plan to dedicate triple the required parkland and open space dedication, protect all heritage trees and remove 15 acres of asphalt.

“I’m aware this is a tremendous increase in entitlements, but I believe they fit in with the vision of the North Burnet-Gateway Neighborhood Plan,” Pool said. “This is where this kind of development should take place.”

Editor's Note: A previous version of this article incorrectly described the campus's current occupancy and the potential percentage of affordable housing units.