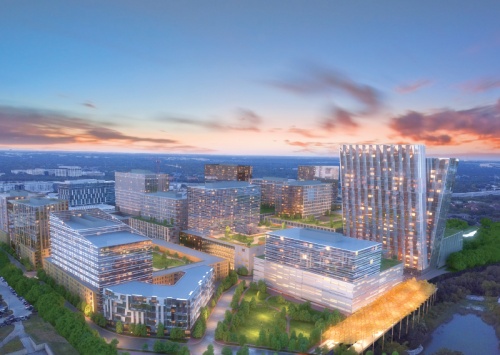 Development in an area targeted almost 20 years ago to be Austin’s second downtown has picked up steam in the past year, including plans to densify the IBM Broadmoor Campus and a proposal for a Major League Soccer stadium.

The city’s North Burnet/Gateway plan—approved in 2007 after years of outreach and planning in the early 2000s—outlines how Austin aims to create a vibrant, walkable area in a part of North Austin prime for redevelopment, said Anne Milne, senior planner with the city’s Planning and Zoning Department.

The Domain, which has its own planned development plan approved in 2003, is not a part of the official North Burnet/Gateway master plan. However, density envisioned around The Domain is now starting to take shape, giving way to the second downtown moniker.

“Everyone knows The Domain has been really successful, and there’s a ton of development around there,” Milne said. “The development along the east side of Burnet has been a little slower, but it’s definitely coming along. In the last few months especially, there’s been a lot of interest in that particular area, even before the soccer stadium announcement.”

In the past couple of months, three major development proposals emerged, including one announced May 25 for a 14-story multifamily high-rise and six-story office building. The largest is the redevelopment of the IBM Broadmoor campus located across the street from The Domain.

On April 12, Austin City Council approved on first reading a zoning change to allow the redevelopment to happen and is scheduled to make the final vote June 14.

Representatives from the Brandywine Realty Trust, which owns the IBM campus, declined to comment before the vote on its plans to build more than 2,000 housing units and double the amount of office space to more than 2.1 million square feet.

In 2015, IBM Corp. sold its share of the 66-acre campus to Brandywine, which aims to redevelop the site with office, residential, retail, restaurant and hotel space, according to information provided by the city and District 7 Council Member Leslie Pool at the April 10 council work session.

Pool, whose jurisdiction includes nearly the entirety of the North Burnet/Gateway plan area, said the Broadmoor redevelopment is the kind of project that Austin City Council wants to see: one with community benefits, such as relocating the Kramer MetroRail station and adding public parking as well as maintaining 9 acres of parks and green space.

“Why I really want to shine a light on the work this group has done is they didn’t say, no we can’t afford it. They came in saying we want to do this for your community because it’s the right thing to do and we can do it and know it will be a long-term value investment,” Pool said. “I would love to see that kind of attitude adopted by the other developers who come in and also want to make a big splash and put a lot of square footage on the ground. This, for me, is a model.”

Pool said Brandywine is also planning on incorporating bike lanes on its streets in the development as well as connecting to the future Red Line Trail along the MetroRail Line, reinforcing the walkability and bikeability goals set out in the North Burnet/Gateway plan.

It is these community benefits, and the fact Brandywine considered their input early on, that won over the residents of the Gracywoods neighborhood to the east, neighborhood President Francoise Luca said.

“This is a very good example of how well-managed redevelopment should be in the urban setting,” she said.

Gracywoods has a long history with IBM, which first opened its manufacturing plant on Burnet Road in the 1960s. The neighborhood was the company’s first bedroom community, Luca said.

“There’s still this tie to that complex, and of course they want to see the best,” she said.

Residents liked the benefits that relocating the train station to the campus could bring, especially with the proposal to build a parking garage with 400 spaces, Luca said.

Capital Metro is also on board with Brandywine’s proposal to move the Kramer Station. President and CEO Randy Clarke said the agency sees value in public-private partnerships, including with Brandywine and whoever develops the McKalla Place site, which also has been proposed for a new station.

“The current Kramer Station, I think everyone can agree, is not the perfect location for a rail station the way the development’s happened since then,” he said. “If these other two stations come to fruition, [the Kramer] Station would go away and then we would have the proper spacing in between to run service at the right frequency and train operations.”

If Brandywine builds a new rail station, the North Burnet/Gateway plan would need to be amended to move the transit-oriented development zone to allow for building heights of up to 360 feet, according to the city.

Another recent proposal that has also garnered significant public attention is a proposal to build a Major League Soccer stadium in North Austin.

In 2017, Precourt Sports Ventures, operator of the Columbus Crew MLS team, announced it plans to move the team and build a new stadium. The company is now eyeing a 24-acre tract of city-owned property off McKalla Place near Burnet Road for the stadium, but many residents question whether the roads could support an increase in traffic.

City staffers have been meeting with community members to gather feedback and prepare a report due to the City Council on June 1.

Since Precourt has been courting the city, several others have emerged with interest in developing the site, Pool said. And the council, she said, will likely focus on trying to answer the question: Is a stadium the best use for the McKalla Place site?

Another proposal for a mixed-use project to the northwest has been pitched, said Greg Kiloh, redevelopment project manager for the city’s economic development department. However, city records indicate no official application has been submitted as of May 23.

The North Burnet/Gateway plan envisions development that is accessible not only by vehicle but also by walking and biking, which is a big shift from the existing roadway configuration. The city’s 2016 Mobility Bond identifies several improvements for Burnet Road, including improvements at Braker and Gault lanes and Esperanza Crossing.

“Burnet Road is so unfriendly to anyone other than a car at multiple intersections,” Milne said. “I think that’s a big barrier to the development up in that area. All the activity is happening on the west side of Burnet, but the train station is on the east side of Burnet, and it feels like this scary, empty zone, so I think those kinds of improvements will be really helpful.”

Area residents have said recent development at The Domain has already significantly increased traffic on Burnet Road.  The roadway south of MoPac saw average daily traffic counts increase from 19,800 vehicles in 2010 to almost 29,000 in 2016, according to the Texas Department of Transportation.

Because the Brandywine project is expected to generate 38,450 new trips, according to the traffic impact analysis, the company has agreed to fund more than $3 million in traffic improvements, mostly to add turn lanes and install or upgrade traffic signals.

Residents who attended a May 1 meeting hosted by the city to learn more about the proposed soccer stadium also raised concerns over even more traffic funneling into the area.

“[The stadium] would be a complement to the area because it would [generate] off-peak traffic,” Precourt attorney Richard Suttle said.

He also pitched an idea to operate a shuttle from The Domain. But that raised concerns for area resident Martha Dyess.

“If they have interest in using The Domain’s parking, we do not want people crossing Burnet,” she said.

The shuttle idea also drew skepticism from Pool, especially given that The Domain is private property.

“We can’t even get buses at The Domain,” she said.
SHARE THIS STORY