The proposed Texas coastal barrier would stretch 76 miles and cost $23 billion-$32 billion to construct over 10-50 years.

The U.S. Army Corps of Engineers and Texas General Land Office will soon consult officials from other countries, local experts and public comments as they refine their Coastal Texas Study, a plan to improve and protect the Texas Gulf Coast from hurricanes and other devastating storms.

Both groups on Dec. 18 held their final public meeting to gather public input on the study.

The plan’s biggest component is a Texas coastal barrier of floodwalls and levees that would stretch 76 miles across Galveston Island and the Bolivar Peninsula and include a navigable storm-surge barrier gate—the biggest in the world—between both islands. The plan also includes ecosystem-restoration measures, such as beach restoration and shoreline protection, along the entire Texas coast.

Over the next three months, officials will use public comments to help modify the plan, Project Manager Kelly Burks-Copes said.

“That basically helps us strategize what we’re gonna do in terms of optimization [of our plan],” Burks-Copes said.

Col. Lars Zetterstrom of the Corps said it is too early to tell how radically public comments might change the plan.

“Until I see all of them, I can’t speculate on how it will change the direction of the study or the final report,” he said.

Other groups—including Texas A&M University; the Gulf Coast Community Protection and Recovery District; and the Severe Storm Prediction, Education, & Evacuation from Disasters Center at Rice University—have all recently released coastal studies of their own. The Corps and GLO will work with these groups to see what parts they can borrow from each other to make the plan as strong as it can be, Burks-Copes said.

Early next year the Corps and GLO will bring in members of I-STORM, an international group that has successfully implemented storm-surge barriers in countries such as the Netherlands, Italy and more. The members will assess the Coastal Texas Study and submit their perspectives and suggestions to help optimize the plan, Burks-Copes said.

The Corps early next year will also run ship simulations to help determine where the storm-surge barrier gate should be built to allow ships to still turn in Galveston Bay, she said.

The plan needs to be fine-tuned to determine several details, such as exactly where the barrier gate will go, what type of gate it should be, how high and wide certain floodwalls should be and what material they should be made of, and more, Burks-Copes said.

“It would be a very complex system,” Williams said of the barrier gate.

Similar gates are proposed along Clear Creek and Dickinson Bayou that must be designed and optimized for height and other factors. They will include pumping stations that need to be assessed for capacity, Burks-Copes said.

Zetterstrom said the plan, while costly, is necessary.

“I think it’s extremely essential,” he said. “We can’t afford to not do something to protect the Texas coast in the future.”

The Galveston area is home to a huge population and a large portion of the nation’s oil and gas industry, which prompted the idea for the Texas coastal barrier and storm-surge barrier gates, Williams said.

The study will be complete by early 2021, after which officials will seek Congressional approval and funding. The plan will cost an estimated $23 billion-$32 billion and take anywhere from 10-50 years to construct. 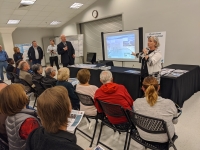