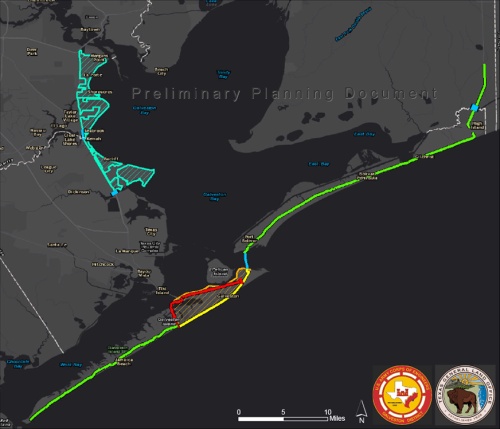 The Texas coastal barrier would stretch 76 miles and cost $21 billion-$31 billion to construct over 10-50 years.

The U.S. Army Corps of Engineers on Friday released the Coastal Texas Protection and Restoration Feasibility Study, a report examining the possibility of constructing a coastal barrier of floodwalls along Galveston Island and the Bolivar Peninsula to protect Texas' coast, including the Bay Area.

The 442-page study is a draft report on the feasibility and environmental impact of "alternatives to enhance, restore and sustain the environment, economy and culture along the Texas coast," the study reads. The alternative the corps is focusing on includes creating structures such as levees, floodwalls, surge barrier gates and breakwaters, and other features such as habitat restoration and shoreline erosion-control efforts, according to the study.

If approved by Congress in 2021, the coastal barrier would stretch 76 miles along Galveston Island and the Bolivar Peninsula. It would cost an estimated $21 billion-$31 billion to construct and take anywhere from 10-50 years to construct, said project manager Kelly Burks-Copes. The Texas coastal barrier would stretch 76 miles and cost $21 billion-$31 billion to construct over 10-50 years.[/caption]

The project is a response to Hurricane Ike and is the corps' effort to protect the coast, Burks-Copes said. The Texas coast is worth protecting because it is "integral to the success of the state and the nation," the study reads.

The plan includes 160,000 acres of nonstructural features such as creating and restoring fish habitats, marshes, dunes, beaches, islands and more.

“…Our plan that is the only plan to date that talks about environmental impacts and incorporates ecosystem restoration into the design," Burks-Copes said.

Other organizations, such as the Gulf Coast Community Protection and Recovery District, are also considering coastal barrier projects, she said.

The study, which began in 2015, is a 5.5-year process, and the corps is about halfway through. The corps will seek public comment on the project before finalizing it and sending it to Congress for possible approve in 2021, Burks-Copes said.

A couple organizations have raised concerns over the study and project.

The Galveston Bay Foundation on Friday issued a press release claiming the study "does not adequately address the potential impacts to Galveston Bay's ecological health and the continued productivity of its commercial and recreational fisheries."

"Decision-makers and the public should understand the true benefits and costs of such a massive structure before moving forward," the release reads. "Furthermore, the Corps should continue to explore the development of timelier and less costly alternatives to the Corps’ proposed $14 [billion]-$20 billion coastal barrier."

Nonprofit organization Bayou City Waterkeeper also raised concerns, noting in a press release there are "lingering questions" on how the coastal spine project would affect commercial and recreational fisheries and communities outside the floodwall's protection.

“It’s disappointing to see that the Army Corps has not fully explored less costly—and more time-sensitive—solutions for coastal protection,” Jordan Macha, Bayou City Waterkeeper executive director, said in the release. “The coastal barrier alternative could be one of the costliest public infrastructure projects in U.S. history. Citizens living along Galveston Island and Bolivar want protections that will protect people and property; a critical step in achieving that goal is to reverse the loss of natural storm protections through timely, cost-effective measures.”

The organization has come up with its own potential alternatives to the project.

The U.S. Army Corps of Engineers and Texas General Land Office will hold a public meeting from 5:30-9 p.m. Dec. 18 at the Bay Area Community Center, 5002 E. NASA Parkway, Seabrook, to further educate the public about the study and projects.

This story was updated at 11:14 a.m. Oct. 31 to clarify points after an interview with U.S. Army Corps of Engineers officials.