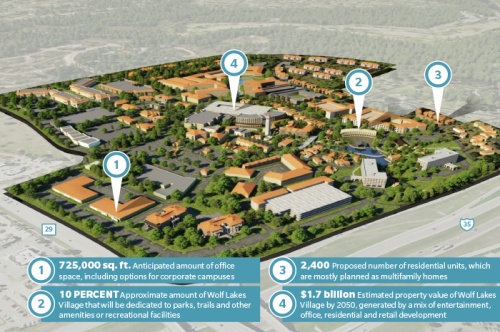 Wolf Lakes Village will include a mix of residential, commercial, retail and entertainment development at I-35 and Hwy. 29 in Georgetown

Wolf Lakes Village, which could eventually add nearly 5 million square feet of new development northwest of the I-35 and Hwy. 29 intersection, is poised to break ground this year following regulatory approvals in late 2018.

For Iva Wolf McLachlan, president of Wolf Lakes LP, a 2019 start to the project would culminate years of planning for the 164-acre property, a portion of which was the last piece of Georgetown land bought by her father, Jay Wolf, before he died in 1996.

“It’s highly meaningful,” she said. “It is an extraordinary piece of land. … We want to do something exceptional for Georgetown.”

Wolf Lakes LP, which serves as the master developer for the project, anticipates Wolf Lakes Village will develop as a regional employment center, home to 4,500 workers and containing more than 725,000 square feet of corporate offices. The development could also include up to 2,400 residential units, according to planning documents. [The European-style concept’s design will be pedestrian-friendly and include an open-air pavilion, parks, trails and lakes as well as an option for an amphitheater.

“If you look at any corporate campuses today, they don’t want to be out just on a tract of land anywhere. It’s all about having amenities and walkability where your employees can live there and work there and shop and play and have the whole lifestyle that most people are really wanting,” McLachlan said.

The property will be built in multiple phases, according to planning documents. The first construction will build multifamily housing and is anticipated to start in 2019. Retail, commercial and office development will follow.

“We will go as fast as we can to capture the market demand, but we’re not going to be able to have an exact timetable. ... Our goal is to bring corporate users here that will bring high-quality jobs to Georgetown, which Georgetown needs,” McLachlan said.

Wolf Lakes LP estimates Wolf Lakes Village’s property value could reach $1.7 billion by 2050, compared to an estimated $460 million in value if the property was built up as a more traditional development.

The scale of Wolf Lakes Village is bound to bring significant change to the look and character of Georgetown, at least in the area near I-35 and Hwy. 29 near the city’s center.

At City Council meetings in November and December as well as in an interview with Community Impact Newspaper, McLachlan acknowledged concerns of some Georgetown residents over the effect of the city’s quickened pace of population growth and development.

McLachlan said she wants Georgetown to retain its quality of life and the city’s likable qualities that are attracting more new residents. She said the key for the city should be to properly manage growth as it comes.

“I would just say the whole objective is to manage growth and to be smart about growth and to have high-quality projects like Wolf Lakes is intended to be,” she said.

Georgetown City Council Member Steve Fought said he is glad the city has an opportunity like the Wolf Lakes Village project.

“This is an impressive project,” Fought said during a Nov. 27 council meeting. “This is a true game-changer.”

Williamson County Precinct 3 Commissioner Valerie Covey said local leaders “want to encourage this type of development because of the jobs that it would create.”

“This is a unique development, as it provides the opportunity for employment centers instead of retail and residential alone; in fact, there is a restriction on the amount of residential in this project,” Covey said in a statement in December. A TIRZ designation lets private developers and local governments take advantage of tax increment financing, a funding model spelled out in Chapter 311 of the Texas Tax Code that allows cities to use property tax revenue to reimburse developers for building public infrastructure improvements, such as roads, water lines, parks and trails.

The mechanism is meant to help cities add infrastructure in less-developed areas and reduce the cost of private development, according to the Texas Comptroller of Public Accounts.

The tax-funding arrangement among Wolf Lakes Village, the city of Georgetown and Williamson County would pay back the developer through property tax reimbursements for up to $130 million in infrastructure additions on the property as it builds out over the next 10-20 years.

Property tax reimbursements at Wolf Lakes Village will be determined based on future property value increases above the property’s 2018 taxable value of $4.6 million, according to TIRZ documents.

City officials also plan to coordinate future traffic improvements in the I-35 and Hwy. 29 area with the county, the Texas Department of Transportation and Wolf Lakes LP. Several other developments are underway nearby, including the Wolf Ranch-Hillwood master-planned community and the Wolf Crossing retail center.