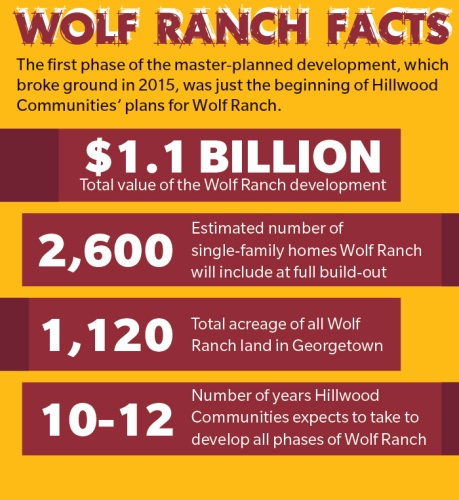 The first phase of the master-planned development, which broke ground in 2015, was just the beginning of Hillwood Communitiesu2019 plans for Wolf Ranch.

Georgetown’s 1,120-acre Wolf Ranch development will become one of the largest master-planned communities in Central Texas after an upcoming expansion.

A second phase of Wolf Ranch north of West University opened to homebuilders this summer, and additional phases are planned south of the roadway. When full, the $1.1 billion development will include about 2,600 single-family homes and several multifamily complexes along with commercial areas and possibly an elementary school, according to Hillwood Communities, the Dallas-based company that broke ground on Wolf Ranch in 2015.

“Our goal is to build through and complete it within a 10-to-12-year timeframe,” said Duke Kerrigan, Hillwood’s Austin-area general manager.

In June, Hillwood bought 366 acres of property south of West University adjacent to the 754 acres the company owns. The addition extends Wolf Ranch boundaries to the bank of the South San Gabriel River west of I-35.

Other activity is taking shape nearby.

Wolf Lakes Village, an Italian-themed development proposed west of I-35 and north of West University, could include to up to 4 million square feet of commercial and residential space.

The north portion of the Southwest Bypass, a new two-lane roadway between West University and Leander Road, opened in July. An extension of the bypass southeast from Leander Road to the southbound I-35 frontage road is under construction and anticipated to open in late 2019.

Hillwood’s 366-acre land purchase will allow for about 800 single-family homes and about 23 acres of parkland within 366 acres of property that is known as the Guy Tract, south of Wolf Ranch land already owned by Hillwood.

Kerrigan said Hillwood anticipates starting development in the Guy Tract toward the end of 2019 and having it ready for homebuilders by mid-to-late 2020.

Wolf Ranch should build out gradually in phases, Kerrigan said. Development plans include a mix of land use, including multifamily housing complexes as well as neighborhood businesses, offices and other commercial properties. New home prices are anticipated to start in the $300,000 range, according to Hillwood.

“All of our development action is predicated upon market conditions,” Kerrigan said.

Hillwood also sold about 18 acres of land south of West University to Georgetown ISD in July 2017.

GISD Communications Director Melinda Brasher said the district bought the site with the intent to build a future elementary school, which would need funding and GISD board of trustees approval before moving forward.

As part of expanding Wolf Ranch, Hillwood will spend $3 million on a trail and park system within the development, according to the company.

Those plans include a trail project along the South San Gabriel River that would connect with a proposed city trail extension to Garey Park, the 525-acre public park that opened in June on FM 2243 between Georgetown and Leander.

“We think it will be a very highly regarded attribute for the development of Wolf Ranch,” Kerrigan said of Wolf Ranch’s trail and park additions.

Several residents of neighborhoods near Wolf Ranch raised concerns with City Council, which accepted Wolf Ranch’s changes after approval by the city’s planning and zoning commission, over effects that additional development may have on tree preservation and stormwater runoff into the South San Gabriel River.

“It is in our best interest to manage the property as best as we can,” Kerrigan said.

As of mid-July, 142 homes have sold in Wolf Ranch’s existing neighborhoods, according to Kerrigan.

A new amenity center, called The Den, in Wolf Ranch opened in April at 1000 Legacy Crossing, Georgetown. The center includes a pool with a 150-foot “infinity edge” as well as indoor and outdoor multipurpose spaces for Wolf Ranch community residents.

Hillwood bought its original Wolf Ranch land from the Wolf family in 2014.

Wolf Lakes Village, located on 164 acres of Wolf family property north of West University, will include a mix of commercial and residential projects. The McLachlans' vision for the property combines homes, shops, restaurants and offices into a single community linked by stone streets, three lakes, a central plaza and arched bridges.

A separate project proposed by Austin-based CSW Development called Wolf Crossing will add 250,000 square feet of commercial space along East University Avenue across I-35 from Wolf Ranch. Site plans include space for a future hotel, grocery store and medical office.

Another development on West University bordering the west edge of Wolf Ranch could include a retail shopping center, commercial sites and an assisted-living center.

City Council approved a rezoning request in July for the 34-acre property, known as Bluebonnet Plaza.

Now open to traffic, the 2.4-mile north portion of the Southwest Bypass cuts through Wolf Ranch.

Georgetown Mayor Dale Ross said the roadway has been in planning and development in some shape or form since the 1980s. The mayor said the north segment provides a “critical north-to-south connection” between West University and Leander Road as development in the area continues.

Valerie Covey, the Precinct 3 commissioner for Williamson County, said the new roadway will also help ease traffic from drivers passing through Georgetown along Hwy. 29, which becomes University Avenue as it continues through the center of the city.

“This is a long time coming to open this part up,” Covey said during a July 18 ribbon-cutting ceremony for the north segment.

The bond-funded $18.3 million roadway completed in two years by Jordan Foster Construction is one of the largest roadwork projects in city history.