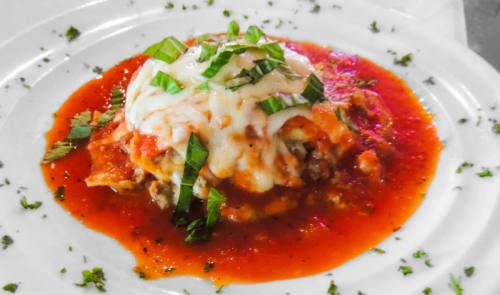 When the late Franco and Domenica Pignataro opened Franca’s Real Italian Restaurant on NASA Parkway in 1971, it was the only restaurant for miles, and I-45 could be seen from their window.

Nearly 50 years later, the once-empty fields around the restaurant are bustling with numerous eateries and businesses. Despite that change, Franca’s still stands tall as the original, family-owned, authentic Italian restaurant in southeast Houston.

Franco Pignataro moved from Italy to Santa Fe in 1954 and married his wife, Domenica. Together, they opened Franca’s Real Italian Restaurant.

The Pignataros’ youngest daughter, Franca Pignataro, has owned the restaurant since she was a teenager and grew up in the eatery at her father’s side. The walls in Franca’s entryway are adorned with framed photos of Franco and Franca, along with signs that read “Like father, like daughter.”

“As a kid, I wanted to be just like him,” Franca said. “Everywhere my dad was, there I was, and we even have the same name.”

Since Franca’s’ opening, it has been serving dishes made fresh from scratch, Franca said. The family recipes used are from Italy, and they offer classic fare such as fettuccine alfredo, lasagna and ravioli.

In addition to a rich family history and authentic food, Franca’s is known for exceptional entertainment, Franca said. Live music is played every night by Claudio Sereni, award-winning Italian vocalist and pianist, and live dinner theater shows are performed every other month.

“It’s a special occasion place for people and their families,” Franca said. “People want to come here for their 50th, their 80th, their 13th [birthdays], and kids and teenagers love coming here for prom and homecoming. We do it all.”

Franca’s, which is decorated with numerous elegant sculptures, fountains and chandeliers, is a popular place for celebrating, whether it is a date night, a family outing or an anniversary, Franca said.

“Every day is a special event here,” she said.