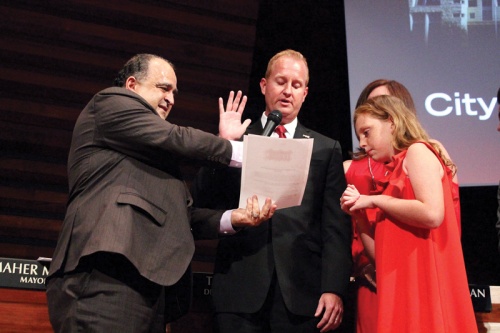 Jeff Cheney is sworn in as Frisco mayor.

What happened
After the May elections, Frisco City Council welcomed Mayor Jeff Cheney, the first new mayor since 2008. The elections also resulted in new City Council Member Brian Livingston and the return of former Council Member John Keating. This school year, Frisco ISD welcomed Mike Waldrip as the new superintendent. Former Superintendent Jeremy Lyon, who had been with the district since 2013, announced his retirement in spring 2017.

The latest
In November, Jim Gandy, Frisco Economic Development Corp. president, announced his retirement. Gandy had been with the FEDC for 21 years and helped bring big corporations into Frisco and attract developments. While the FEDC board of directors conducts a national search for the next president, Assistant City Manager Ron Patterson is serving as interim FEDC president.

What’s next
Gandy will retain a role of special adviser until March 31. City elections will be held in May for Place 3, held by Council Member Will Sowell, and Place 1, held by Keating.

This story is one update from The January Issue. View the full list of 10 stories to follow in 2018 here.