Brix has a variety of sandwiches available for lunch, and some can be found on the dinner menu as well, including “beer-braised pork” with shredded pork, mustard greens, gruyere cheese and brioche; and the “brisket hot link sandwich” with house-made brisket sausage, pickled red cabbage, grilled onions, cilantro and creole aioli.

According to the release, dinner plates include “jacked pork tenderloin,” which marinated in Jack Daniels, plated with molasses baked beans and pork and creamed corn with a cola reduction; “Chili rubbed filet,” an 8-ounce chili-rubbed filet with blackberry compote and sweet potato gratin; and “smok’en duck,” a slow-cooked duck with bourbon cherry bombs and roasted butternut squash.

Felios is also cultivating an herb and vegetable garden located adjacent to the restaurant and will soon harvest the first batch of honey from the hotel’s rooftop beehive.

Georgetown Mayor Dale Ross said he will not seek a third term. 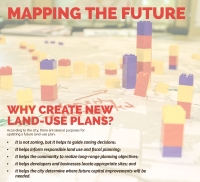