The Texas Department of Transportation will break ground this year on two projects to expand FM 1960 from four to six lanes. (Kelly Schafler/Community Impact Newspaper)

The Texas Department of Transportation will break ground on two projects this year to improve mobility along FM 1960, the major east-to-west corridor between Atascocita and Humble.

The first project widens FM 1960 between Business FM 1960 in Humble to east of Twigsworth Lane in Atascocita; the second widens the road from Twigsworth Lane to just west of the San Jacinto Bridge and adds an overpass over the West Lake Houston Parkway intersection.

The average daily traffic count along the corridor increased in the last 10 years, according to TxDOT data collected at two points between Business FM 1960 and West Lake Houston Parkway. Between 2009-19, 1,346 more vehicles per day were clocked at one location, while 3,774 more were recorded at the other.

“We wanted to make sure that we’re keeping up with that momentum and addressing the growth in the area,” TxDOT Public Information Officer Danny Perez said. 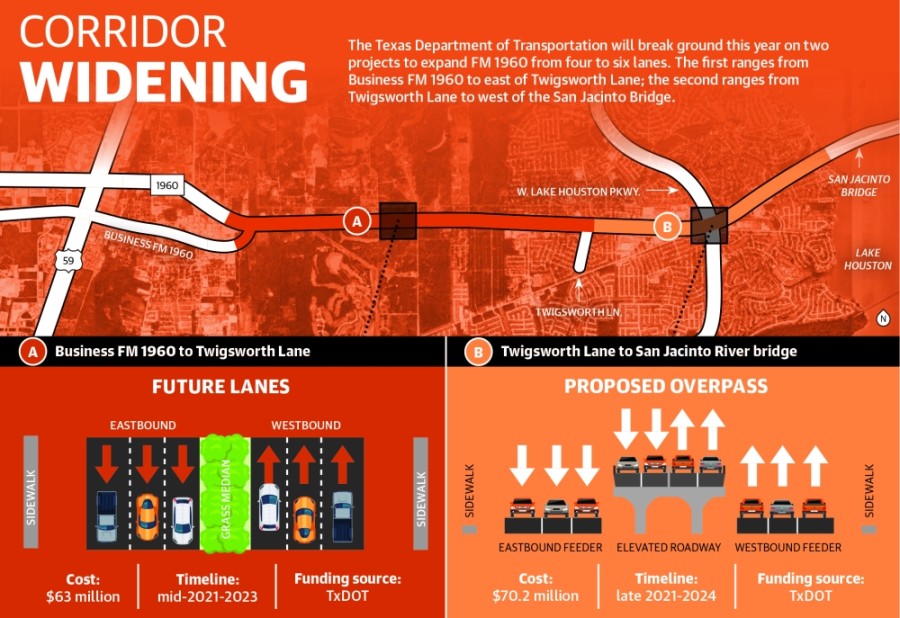 • Check out January's featured neighborhood in the Lake Houston area: Pinehurst of Atascocita, 77346

• Signorelli Co. to focus on infrastructure, expansion in Valley Ranch in 2021

Perez said the two projects will expand the road and improve safety along the corridor by widening its current four-lane road with a continuous center turn lane to a six-lane road divided by a grass median with 5-foot pedestrian sidewalks.

The outer lane of the eastbound and westbound sides will also feature a shared-use lane for cyclists—a feature contended by at least seven individuals who submitted comments at TxDOT’s public meeting for the project in February 2016. Perez said widening the sidewalks would have required significantly more right of way, so TxDOT did not pursue this feature to avoid further affecting businesses along the corridor.

Perez said contractors should begin work on the first project—the $63 million western side—in mid-2021 and complete it in 2023. Another contractor hired to complete the $70.2 million widening and overpass on the eastern portion will also begin work in mid- or late 2021. Perez said TxDOT estimates the eastern project will wrap up in 2024, but the timeline could change due to construction-related factors or inclement weather.

TxDOT public meeting documents from 2016 also show some business owners were concerned about accessibility to their business during construction as well as the overpass reducing traffic to some businesses.

“There will be some impact, of course, but we work with folks in the community. We address their concerns,” Perez said. “If someone has a business, the goal is to ... not have their business impacted.”

Mark Mitchell, the chief economic development officer of Partnership Lake Houston, said road improvements that connect motorists to other major thoroughfares can be a tool used to attract development to the Lake Houston area.

“Those types of projects for us are really great sales tools in terms of both local projects that are looking to expand ... and then larger national projects,” he said. “Projects like this give us the ability to ... show companies we can get you from Point A to Point B ... very expeditiously.”
Read another top transportation story of 2021: TxDOT's Loop 494 expansion project delayed to third quarter of 2021.
Lake Houston-Humble-Kingwood Annual Community Guide 2021 Danny Perez Mark Mitchell Partnership Lake Houston Texas Department of Transportation FM 1960
SHARE THIS STORY