Plano City Council approved a zoning change for Plano Market Square Mall that is tied to the planned redevelopment of the site. (Screenshot courtesy city of Plano)

The planned redevelopment will bring about 325 new apartment and townhome units to the city as well as up to 16,500 square feet of restaurant and retail space.

“We have a comparatively very high ratio of multifamily [residences] in Plano,” Council Member Shelby Williams said. “I've long said that additional multifamily needs to really make sense, and I think it does right here.”

Portions of the abandoned mall, which is located at the corner of East Spring Creek Parkway and K Avenue, will also be repurposed for around 178,000 square feet of office space along K Avenue. Williams said the property is “desperately” in need of revitalization.

“[The developers] propose something that is moderately dense,” he said. “And while it's nowhere near the same scope and scale as the Collin Creek development, I'm hopeful that they can serve as bookends of our [US] 75 corridor and really spur the revitalization across that entire area.”
RELATED STORIES

With the approval, Houston-based Triten Real Estate Partners founder and owner Scott Arnoldy said the company hopes to close on the property and amend its working capital plan for the project by the end of the year.

“We are looking to move very fast and get under construction about as fast as any developer could,” Arnoldy said.

Plano Market Square Mall was built in the 1980s and later operated as an outlet mall. The building is now largely unoccupied, city staff have said. It is within one of the areas identified as a village concept in the Envision Oak Point Plan, a broad development guide for the city’s eastern Oak Point area adopted in 2018. The village concepts are meant to act as transitional buffers between more active mixed-use and commercial areas as well as single-family housing, according to the Envision Oak Point community vision map.

“We thought you could create an intimate village-like environment that still integrates well to the Plano-adjacent neighborhoods,” Arnoldy said of Triten’s plans.

The east portion of the existing mall structure will be demolished for a two- and three-story multifamily housing development with up to 325 units. The two-story townhome units will be slightly elevated and have pitched roofs, giving them a more single-family home look, Arnoldy said. 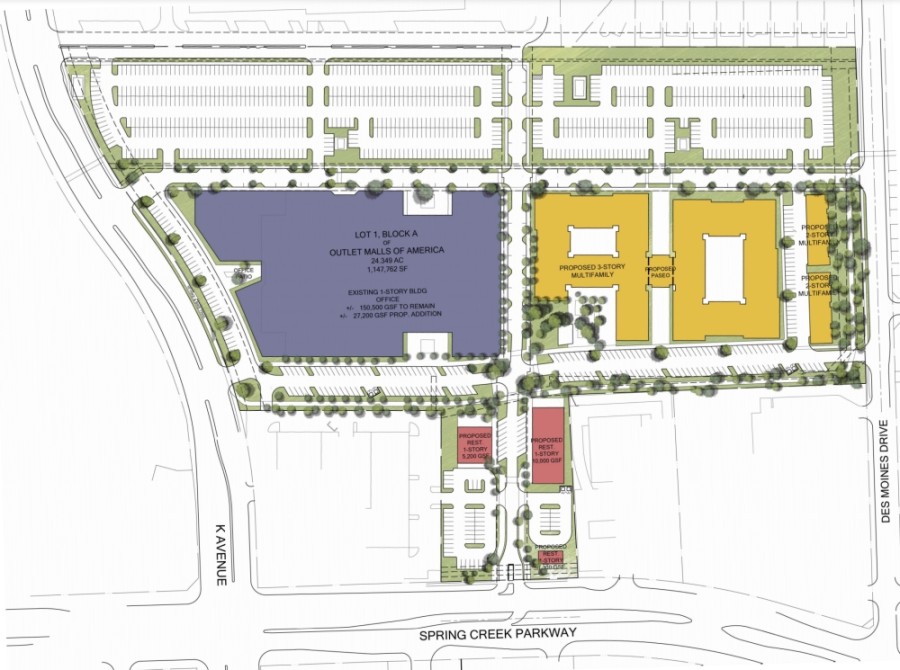 Triten expects to have 150,000 square feet of green space throughout the property as well as a 10-foot hike and bike trail that will run from Des Moines Drive on the east side of the development to K Avenue on the west. Fifty-foot landscape buffers on Des Moines Drive and to the north will help create a transitional space for surrounding neighborhoods, according to the proposal.

Plano Director of Planning Christina Day said the city received “nothing but support” for the proposal when it reached out to the public.

The property in question would be visible to law enforcement and others driving toward the jail and allow LifePath Systems to design professional office space. The intent would be to relocate all of LifePath’s crisis services to this facility.