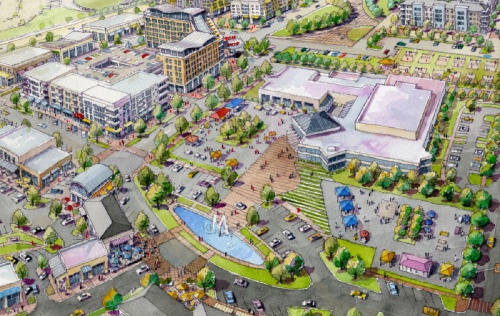 The city of Plano has adopted a broad development plan for the city’s eastern Oak Point area, part of an effort to attract developers to the largely rural area that is flush with city amenities but also held down by underperforming shopping centers.

The Plano City Council in the early minutes of Tuesday morning approved the Envision Oak Point plan after hours of comments from the public and debate among council members, who voted 6-2 in favor of the proposal. Council members Anthony Ricciardelli and Tom Harrison voted against the proposal, each saying they took issue with some of the “high-density” housing outlined in the plan.

The plan, a result of more than a year of city staff analysis and public input, calls for a denser mix of housing than Oak Point was previously expected to see, with apartments and townhouses proposed to accompany more traditional single-family neighborhoods.

Under the plan the additional residential population in Oak Point would help support more retail and restaurants along Spring Creek Parkway, including a potential mixed-use district near the Plano Event Center. In all the expected economic output of Oak Point under the plan would be more than double that of the area’s current trajectory, according to a city analysis outlined in the plan.

The document does not change existing zoning for properties in Oak Point. Property owners interested in uses for which their land is not currently zoned would still need to seek council approval.

Envision Oak Point traveled a rocky path to Tuesday’s vote. City Manager Bruce Glasscock in May withdrew the plan from council consideration, citing misinformation surrounding the plan and potentially “unresolvable” differences of opinion. In June the council directed the staff to bring back the plan for consideration after requesting minor revisions to the wording.

The plan passed on Tuesday had undergone substantial revisions from its original draft. After a public feedback session in January with Plano Planning and Zoning commissioners and council members, city officials lowered the number of projected apartment units outlined in the plan by 38 percent.