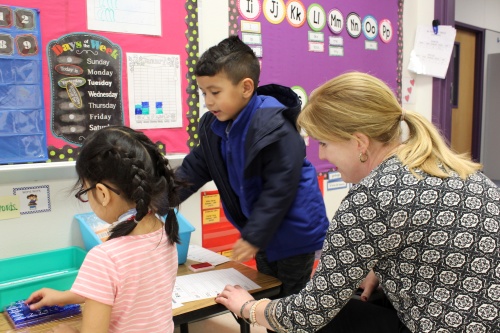 The halls of McKinney ISD’s Caldwell Elementary School are lined with signs reading “welcome” or “bienvenido.”

These are indicators of a unique program offered at Caldwell.

The school is MISD’s only campus to offer a two-way dual-language program with both native Spanish and native English speakers in the same classroom. Students are taught half the time in Spanish and half the time in English. The program helps students learn both languages in addition to the curriculum, which covers everything from math and history to science and reading.

As of Feb. 25, 375 Caldwell students are enrolled in the program, Zabdi Gonzalez, director of MISD’s Bilingual and ESL Department, said in an email.

The two-way dual-language program, which began in 2010, is one way the district continues to cater to the city’s changing demographics.

From fall 2014 to fall 2018, MISD added more than 160 Hispanic and Latino students. During this time, total enrollment decreased by 95 students, according to data from the district.

“Our kids are changing; our population is changing, and we have to learn how to instruct [our students] and how to help them,” Gonzalez said.

Some parents, such as Kristen Yepez, found the two-way program attractive because it teaches students a second language at a young age, she said. Yepez has three boys enrolled in the Caldwell program. She said her family moved from Allen to McKinney four years ago for the two-way program.

Applications for the program at Caldwell for the 2019-20 school year will be accepted until April 5.

During the 2017-18 school year, more than 1 million English learners were enrolled in Texas public schools, and 38,008 teachers were certified in bilingual education, per the Texas Education Agency.

While other districts, such as Austin ISD, are looking to recruit teachers from overseas, Gonzalez said MISD is not there yet.

“We’re very lucky,” she said. “[With] the bilingual teachers we don’t have as much turnover.”

Upon completing the training, these “language experts” will instruct all English learners in middle and high school. Once the teachers understand how language works, they are better equipped to teach their subjects to students who may still be learning English, Gonzalez said.

Maria Gomez is a native Spanish speaker. The mother of three has two children enrolled in the two-way program at Caldwell. Her children speak only Spanish at home, but it is important they also know English, she said.

“I like the program because [my kids] haven’t lost their first language,” Gomez said in an interview in Spanish translated by Caldwell Principal Kelly Flowers. “… I’m fascinated that they are able to learn about my culture, and it’s been a good experience. And in the future, it’s going to help them a lot.”

Native English speaker True Bostick was one of the first students enrolled in the two-way program at Caldwell. Now in eighth grade, she said while the program was challenging, it got easier as time went on, especially when she took Spanish classes in middle school.

“Sixth and seventh grade—that was the best Spanish I feel like I’ve gotten,” Bostick said. “I really understood the language. ... It was easier to communicate with others who spoke Spanish.”

According to a 2017 study in the American Educational Research Journal, English learners enrolled by lottery in dual-language programs at Portland Public Schools academically outperformed their peers by fifth grade.

Before Caldwell’s program began, the Spanish and English classes were separate, and so were the students, Caldwell counselor Sarahbeth Holman said.