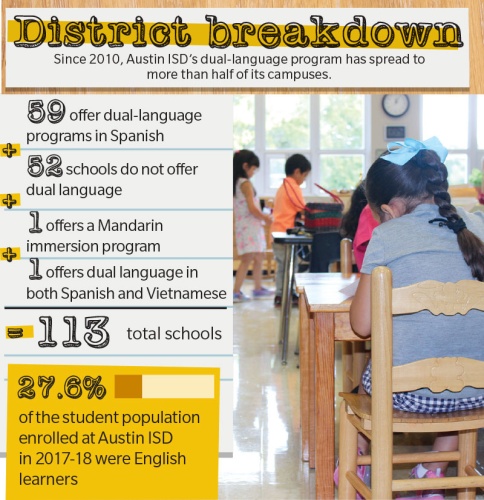 It is the second week of school in Lupe Ramos’ kindergarten classroom at Perez Elementary in Southeast Austin.

Plastic book bins, letters on the chalkboard and a flower pinned to her lapel are all red, signaling to students that the language of the day is Spanish. Next door, a similar classroom is full of blue items, for English-speaking days.

Ramos has worked at Austin ISD for 41 years. This year, after serving as a dual-language administrator, she returned to the classroom because of a teacher shortage.

“I decided a dual-language class is where I needed to go,” she said.

Dual-language programs are available at a majority of AISD’s campuses: 46 elementary schools, 11 middle schools and—for the first time—two high schools. The first cohort of students, who started kindergarten in 2010, are now ninth-graders.

The district began the program in an effort to close the achievement gap between English learners and English speakers, said David Kauffman, director of AISD’s Multilingual Education Department.

The dual-language model combines instruction in two languages with a goal of proficiency in both.

According to a 2017 study in the American Educational Research Journal, English learners enrolled by lottery in dual-language programs at Portland Public Schools academically outperformed their peers by fifth grade.

“The added benefit of dual language is that it also recognizes and maintains and honors the first language as well,” Kauffman said.

“[W]e’re just trying to offer language opportunities for as many students as we can,” Kauffman said.

While bilingualism is widely recognized as an asset in today’s world, it has not always been championed.

In the early 20th century, mass immigration prompted the emergence of an English-only ideology in the U.S., according to a 2014 overview of bilingual education published by the Texas Education Review.

As early as 1918, Texas codified English-only teaching in state laws, and, until a 1981 Supreme Court ruling, many Mexican-American students were forced to attend segregated schools that often had “run-down facilities and equipment, shortened school terms, and large classes taught by underpaid, ill-trained teachers,” per the Texas State Historical Association.

During the Civil Rights Movement, activists lobbied for improved school conditions, and dual-language teaching emerged as an alternative to institutionalized segregation, according to the TSHA.

Today inadequate resources and lasting stigma mean that not all students who would benefit from dual-language programs do so.

“The shortage of bilingual teachers is a national issue, a Texas issue and definitely an Austin issue, still,” Kauffman said.

During the 2017-18 school year, 1,015,972 English learners were enrolled in Texas public schools and 38,008 teachers were certified in bilingual education, per the Texas Education Agency. That produces a student-teacher ratio of about 27:1 across the state.

According to state law, the maximum class size from kindergarten through fourth grade is 22 students.

The district is addressing this challenge by consolidating its dual-language programs to strengthen their impact; using a recent change in Texas law that allows ESL-certified teachers to teach the English component of dual-language programs; and recruiting teachers from Spain, Mexico and Puerto Rico, Kauffman said.

According to district data, nearly a third of AISD students are English learners.

Originally from Venezuela, Daniela De Jongh and her husband moved to Austin from San Marcos to send their children to the district’s dual-language program.

De Jongh said her sons would always learn Spanish at home, but she also wanted them to be literate in both languages. “You cannot do that at home,” she said of teaching reading and writing.

Mary Pustejovsky enrolled her daughter, now in second grade, in the two-way Spanish dual-language program at Brentwood Elementary in prekindergarten.

“I feel like she’s much more aware of languages ... in general, and how English is just one of many and not the best,” Pustejovsky said.

Maile Molin, whose daughter is in third grade at Travis Heights Elementary, echoed this sentiment.

“It matched our values,” she said of the program.

Molin also feels her daughter benefits from a smaller class that is more closely knit for having moved through the grades together.

Brodie said he has had many conversations with his son about the benefits of being bilingual.

“Having that disability, especially if he builds that [skill] now, it makes it easier for him as he gets older.”

While the majority—more than 60 percent at the elementary level—of AISD dual-language students are enrolled in one-way programs, meaning they are intended for English learners, a growing demand for two-way programs, which combine English learners and English speakers, has revealed fault lines.

“When you have shifting demographics at a school, it does complicate it because we do seek [a] balance between English learners and native English speakers in two-way programs,” Kauffman said.

Pustejovsky said Brentwood has “really struggled to keep up the number of English language learners … simply because people can’t afford to live in our area.”

Around one-fifth of Brentwood’s students are economically disadvantaged, and less than one-tenth are English learners, per the TEA.

In comparison, more than half of AISD’s students are economically disadvantaged and more than a quarter are English learners, according to district data.

If an English-learning student is eligible for a  dual-language program but is not zoned for a school that offers one, AISD will bus him or her to one that does.

Suzanne Garcia-Mateus, a professor of education at Southwestern University and parent of two children enrolled in AISD dual-language programs, said this “position[s] Spanish speakers as a resource, as a commodity,” for English-speaking families hoping to foster bilingualism in their children.

“Being part of the dual-language community means being an advocate and an activist,” Garcia-Mateus said. “It takes a lot of advocacy and, I would say, activist work to keep [the program] alive and to keep it equitable.”

AISD is focused on strengthening its dual-language offerings, including planning an expansion to 10th grade next year, increasing the number of school-wide dual-language campuses, considering the addition of a third high school and looking at possible new languages to add at the elementary level, Kauffman said.

So far the district is achieving its goals: According to a 2016 longitudinal study, English learners enrolled in AISD’s dual-language program surpassed their peers in programs that prioritized English proficiency over bilingualism by their fourth year.

Back in Ramos’ classroom, she is busy establishing  routines and support systems through visual cues, such as her flower pin; repetition; hands-on learning; and positive reinforcement, especially for students speaking Spanish.

“There’s so much English everywhere; I’m almost going against the curve,” she said.