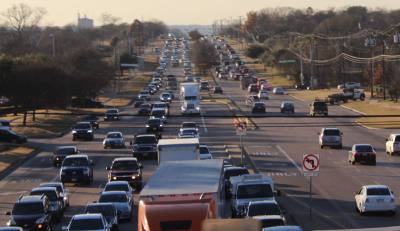 Collin County Commissioners disagree with TxDOT's preferred alignment for the US 380 bypass.

Collin County Commissioners have passed a resolution supporting the development of US 380 as a limited-access roadway along the existing highway—a day after the Texas Department of Transportation released its own recommendation for a bypass to relieve traffic congestion.

TxDOT officials unveiled its preferred bypass option for US 380 from the Denton County line to Hunt County line during a public meeting May 6. TxDOT prefers a combination of alignments, which were labeled in earlier plans as Red A, Red D and Green B.

Collin County Commissioners disagreed with TxDOT's recommended alignment. After hours of discussion during a meeting May 7, commissioners passed a resolution in favor of improving the existing highway, which is labeled on TxDOT maps as the green line, with a few modifications.

Collin County Judge Chris Hill said despite the green line being the most expensive, most difficult and most unlikely to pass an environmental study, he believes it is the best route to support the future transportation needs of the county.

TxDOT’s recommended alignment is estimated to cost $2.597 billion, according to documents presented during the May meeting.

“We are moving forward with the preferred alignment presented last night, but as we move forward, other options can still be consider,” TxDOT Public Information Officer Ryan LaFontaine said when reached by phone May 7.

The green line is proposed to run through Princeton, Lowry Crossing, McKinney, Prosper and Frisco on US 380’s current alignment. The green line would also offer an extension off Spur 399 running either (A) east of the McKinney National Airport or (B) west of the airport.

Commissioners unanimously passed a resolution in favor of this green line after adding several amendments. Commissioners also requesting TxDOT move forward with a modified version of this alignment.

Commissioner Cheryl Williams said at the May 7 meeting there is nothing that can be done today that will alleviate everyone's uncertainty. However, commissioners said they hope their resolution is taken into consideration by TxDOT.

Commissioner Susan Fletcher discussed TxDOT's decision in her newsletter to constituents posted online May 7, stating that the goal with this process is to find a solution for system-wide congestion. With Collin County's population expected to grow to more than three million people at buildout, "doing 'nothing' to improve the mobility in Collin County is just not an option," she wrote.

"While many are personally devastated, the over-arching message is that we must not lose heart," her newsletter continued. "The future of Collin County is at stake, and if this project is allowed to fail, it would be devastating to our entire region, costing each [of] us much more in the long run."
SHARE THIS STORY