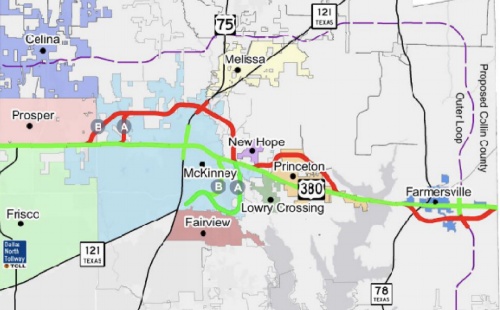 In October, TxDOT presented two proposed alignments for US 380 in Collin County.

According to TxDOT’s presentation Thursday, a feasibility study and residents’ feedback helped consolidate the original five proposed alignment options to create a new “green line” and “red line,” each with two options and a right-of-way width of 330-350 feet.

The original pink and green lines from the first five proposed alignments have been combined to create a new green alignment, which runs through Princeton, Lowry Crossing, McKinney, Prosper and Frisco on US 380's current alignment. The green line offers an extension off Spur 399 running either (A) east of the McKinney National Airport or (B) west of the airport.

The original red, blue and yellow lines were combined to create a new red alignment which loops around the southern end of Farmersville, northern end of Princeton, south of New Hope, through the north end of McKinney, and realigns with the current US 380 alignment at either (A) between Lake Forest Drive and Custer Road in McKinney, or (B) west of Custer Road in Prosper.

According to the presentation, TxDOT has attempted to reduce negative impacts to businesses and residents as much as possible. TxDOT expects to narrow the options to one by early 2019.

After the original five alignments were proposed TxDOT received more than 4,000 comments, in which 84 percent expressed concerns about US 380 including traffic, congestion, safety threats, the pace of future developments impacting congestion and lack of other east/west routes.

The same information will be presented at the next two meetings, which will be held in an open house format with a presentation starting at 7 p.m.

Two more public meetings will be held in McKinney and Princeton:

More information about the alignments can be found at www.keepitmovingdallas.com/projects/us-highways/us-380-feasibility-studies.

Citizens may submit comments online at www.surveymonkey.com/r/RXX3T3S until Oct. 26.