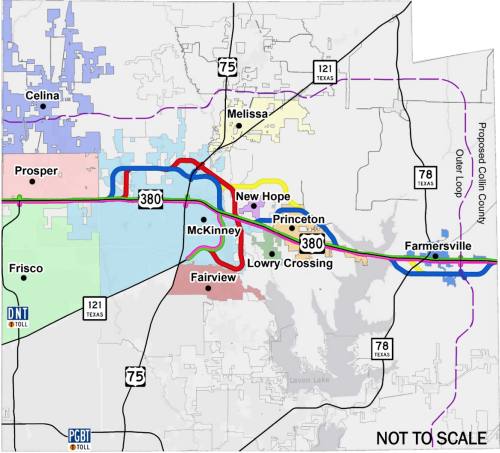 During a meeting April 26, TxDOT officials shared five possible alignment options and three roadway options to relieve traffic and congestion on US 380.

Editor's note: The survey link for resident feedback has been updated.

The Texas Department of Transportation held the first of three public hearings Thursday night to discuss and receive public comments on its proposed US 380 project through Collin County from the Denton County line to the Hunt County line.

During the meeting, TxDOT officials shared five possible alignment options and three roadway options to relieve traffic and congestion on US 380.

“Funding for any type of improvements to US 380 has not yet been identified, which should tell you how early we are in this process,” TxDOT Public Information Officer Ryan Lafontaine said in an email. “But I can tell you that tolling is not being discussed as a possible means of funding.”

Roadway options include maintaining the existing alignment of four to six lanes. This option, in engineering terms, is rated an F level—or the worst level—of service, according to the presentation.

“In [Option 1], congestion would not be fully addressed and future county growth is likely to cause these issues to progress,” said Ceason Clemens, director of transportation, planning and development for TxDOT.

Option 2 is grade-separated intersections, which maintains the existing alignment but allows drivers to bypass select major intersections. Option 2, also rated an F, would have six lanes and frontage road lanes at some intersections but have a small effect on congestion, Clemens said.

Option 3 is a freeway, which involves multiple alignment options, improves safety and has no signalized intersections, according to the presentation. This option, in engineering terms, is rated a B level depending on the alignment.

“If a freeway were to be constructed, traffic congestion would decrease and speeds during peak traffic periods … throughout the corridor would increase,” Clemens said.

Shifting the roadway farther north keeps businesses on the south side of the road intact and shifting the roadway farther south keeps businesses on the north side of the road intact, said Josh Robinson, senior civil engineer at Burns & McDonnell, an engineering firm working with TxDOT to evaluate options on US 380.

In late 2018, TxDOT expects to have an implementation plan finalized for US 380. This would include a recommendation for long- and short-term improvements as well as regional action items, according to the presentation.

It will likely take 10-20 years before most of the projects are constructed and it is possible that the highest priority areas could see construction in as little as six years from now, pending funding, Lafontaine said.

TxDOT officials said they are working with cities, Collin County, the North Central Texas Council of Governments and the Army Corps of Engineers to evaluate future traffic needs, right of way preservation and acquisition and impacts on the environment, including how a corridor could affect residents who live near the surroundings, Clemens said during the presentation.

TxDOT has also been evaluating potential future options and officials said it is possible that other modes of transportation besides roadways could improve mobility in the region. Pedestrian facilities, including sidewalks, will be incorporated into future plans, according to the presentation.

The purpose of the feasibility study, which began in 2015, is to analyze potential roadway options for US 380, including improving the existing alignment or using alternative alignments that could require additional right of way, according to a press release from TxDOT.

Two additional public meetings will be held in May:

All three meetings will present the same information, and representatives from TxDOT and project consultants will be available to answer questions about the proposed project.

Citizens may submit comments online at www.surveymonkey.com/r/Drive380 until May 18.

More information about the study and potential alignments can be found online at www.keepitmovingdallas.com/projects/us-highways/us-380-feasibility-studies.