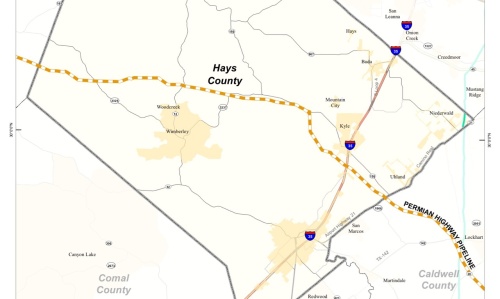 UPDATE Jan. 22: Kinder Morgan released dates and locations of the community meetings it will hold about the Permian Highway Pipeline. They are all from 6-8 p.m.:


Original post Jan. 21: Precinct 3 Hays County Commissioner Lon Shell is hosting a meeting Jan. 29 from 5:30 to 8:30 p.m. at the Wimberley Community Center for members of the public interested learning more about the natural gas pipeline that Kinder Morgan—one of the largest pipeline companies on the continent—plans to build through the county.

A preliminary map of the pipeline route shows a path running between Kyle and San Marcos, then just north of Wimberley.

In a written release, Shell said the meeting will include a panel of experts and a presentation from representatives already working with affected landowners who “will share information about the planned route as well as discuss environmental concerns, property rights, and other issues related to the project and its potential impact on Hays County.”

Kinder Morgan has been informed of the meeting, but no one from the company is on the agenda; representatives of Kinder Morgan have previously said they will be hosting community meetings in the area.


Newly elected state Rep. Erin Zwiener, D-Driftwood, told Community Impact Newspaper in December that she hopes to speak to Kinder Morgan about changing the route of the pipeline, but she does not have many options.

“I will also say it’s fundamentally a hard issue because pipeline companies in Texas have almost unlimited authority to determine their own route and to condemn private land,” Zwiener said. “So we don’t have a lot of tools other than that of persuasion, quite frankly.”