• Amid Pflugerville ISD growth, residents weigh in on rezoning proposals

The city of Pflugerville will implement several additional safety features along Kelly Lane beginning the week of Feb. 1.

Whether you are coming to Texas for a vacation or looking for a staycation in your neck of the woods, Redbud Ranch RV Resort is now open in Hutto.

Austin FC will play its home games at the newly named Q2 Stadium when the Major League Soccer season begins later this year.

Eileen’s Colossal Cookies will close its Cedar Park location in February, according to its Facebook page. The business will continue as normal through Feb. 13 and will close when it sells out or on Feb. 27.

When Marisol and Ismeal Sanchez opened Marisol’s Mexican Grill in July, dining capacity was limited to 75%. Then, it went back down to 50%, but the restaurant owners have stayed optimistic and determined.

Students, families and fans at Hays High School sporting events will cheer on the Hawks next fall, the new mascot students selected to replace the school's Rebels mascot, which was a callback to the Confederacy.

For Last Stand Brewing Co. owner Jim Sampson, 2020 was supposed to be a monumental year for the company he launched in Dripping Springs in 2015.

Tutor Doctor Lakeway, which was established two years ago by owner Michelle Smallwood, pivoted operations amid the coronavirus pandemic to create an alternative learning environment for students.

From a bicycle training studio to a drive-thru margarita store to a Mexican restaurant, many businesses have been opening in New Braunfels in the last four weeks.

Having grown up with myopia, or severe nearsightedness, Round Rock High School junior Soham Govande is all too familiar with how visual impairments impact day-to-day living. Pulling from his personal experience, Govande set his sights on a mission to decrease health disparities globally, one eye exam at a time.

The Triple-A Championship Season has been delayed to increase the likelihood of minor league players' COVID-19 vaccine eligibility.

Hutto's special election for the mayoral seat and City Council Place 3 will be held March 6. 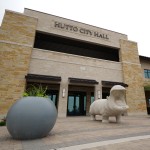