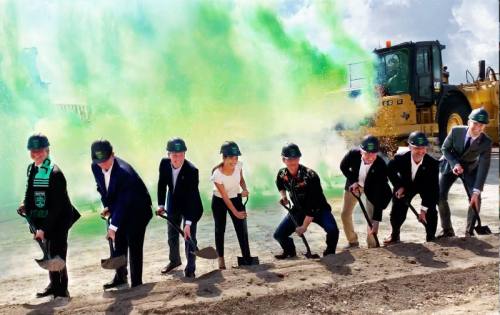 Growing up in France and then Brazil, North Austin resident Camille Crouzet was at first excited about Major League Soccer launching a team in the city.

But after learning that Austin FC—FC meaning football club—has not yet released its plans for traffic and event management, he said he has major concerns about safety at the stadium because it is essentially landlocked by railroad tracks and two major roadways.

“It’s my main concern for going to a stadium like this,” said Crouzet, who lives in Gracywoods. “My other concern is since they don’t have parking, there is nothing for the traffic right now. The neighborhood will be so congested.”

Crouzet said he is not alone in his concerns over Two Oak Ventures, the investment firm that owns Austin FC, and its plans to build a $242 million soccer stadium and park on 24 acres of city-owned land at 10414 McKalla Place, southeast of the intersection at Burnet Road and Braker Lane.

Other residents, including Margaret Sammis, say this lack of transparency makes them question the viability of MLS in Austin. She said other residents she spoke to feel their voices have not been heard.

“This is a sweetheart deal for this company where they pay no taxes or anything,” Sammis said.

Under a packed tent the morning of Sept. 9, Austin Mayor Steve Adler addressed city officials and Austin FC leaders at the stadium groundbreaking. He said soccer has the potential to unite the city.

“This team, this field, this stadium, this culture, this sport has the opportunity to really bring this community together in ways that don’t happen often enough,” he said.

The 20,500-seat stadium will take about 18 months to complete with an opening likely in April 2021. In early August, Two Oak Ventures received its first permit to clear the site. As of Community Impact Newspaper’s press deadline Sept. 18, the firm had not yet received its site plan permit.

“This is going to be a year-round stadium for soccer matches, for cultural events, [and] it’s going to be a soccer park on non-game days,” said Anthony Precourt, the managing partner and CEO of Two Oak Ventures and Austin FC. “We’re building this stadium to be fan-friendly. It’s all about fan comfort, shade protection, technology. … It’s 100% privately financed. We’re going to build this for the city of Austin.”

Even if the MLS season begins before the stadium is complete, Precourt said the team has options.

“It’s not atypical to play a few games on the road to start the season,” he said. “We’ll be ready.”

The city of Austin finalized its lease agreement with Austin FC last December. This agreement details the community benefits the team agrees to adhere to as well as certain milestones it must meet.

Under the agreement, Two Oak Ventures would not pay any property taxes for use of city-owned land. Instead, starting in year six of the lease agreement the investment firm would pay the city a base rent of $550,000 per year and $125,000 per year to put into a capital repairs fund.

Two Oak Ventures will also have to develop at least 130 affordable housing units on the site or “other mutually agreed location” within four years of the stadium completion.

“We expect to have [the affordable housing built] by 2025, which is consistent with our lease and development agreement,” Two Oak Ventures President Dave Greeley said at an Aug. 21 State of the Stadium event.

At an August Gracywoods meeting, residents heard from attorney Richard Suttle, who is representing Two Oak Ventures and Austin FC, that the affordable housing may not be on the site. Sammis said she felt like the company is misleading residents.

However, Foundation Communities Executive Director Walter Moreau told Community Impact Newspaper via email the goal is to pursue building on the site as other locations might not make sense.

Another unanswered question is when the traffic study will be completed. The city of Austin requires a development to complete a traffic impact analysis when the number of vehicle trips per day generated by the development is expected to surpass 2,000.

This study is typically done prior to a zoning change request or when submitting a site plan application. Under the lease deal with the city, however, Austin FC will not have to complete its traffic plan until the stadium is substantially complete. When asked about a timeline for these plans, Precourt said he did not know.

The city of Austin is hoping to advance improvements it is planning to the Burnet and Braker intersection that are being funded through the 2016 Mobility Bond. The city plans to add dual left-turn lanes in each direction, medians and bicycle facilities and is targeting to complete the work before the stadium opens, said Mike Trimble, director of the city’s corridor program office.

Gracywoods resident Craig Nazor said the location of the site could be problematic for flooding nearby neighborhoods because the site slopes east toward Little Walnut Creek and holds water underground.

“None of the mitigation they put in is going to be enough for [a heavy thunderstorm],” he said. “This site essentially had 0% impervious cover; it’s going up to 85%.”

The safety of the stadium site and workers building the project is also being questioned by residents.

The site previously was home to Reichhold Chemicals, which closed in 1985 after an explosion occurred. The site was remediated to remove hazardous materials, according to a 2006 city lawsuit against Reichhold.

In 1995, the city bought the 24-acre site with plans to build the Austin Water Utility North Service Center, but plans halted in 2003 after another explosion occurred. Although the site was remediated again and certified as safe by the Texas Commission on Environmental Quality, Aleshire said documents he obtained from the city indicate workers may need to take precautions during excavation because hazardous materials may still be present in the soil.

In an email from Greg Kiloh, the city’s redevelopment project manager for the site, he reported former chemical plant buildings were demolished around 2003. He said most of the site would not present any problems for safety except near those pads.

“When it comes to excavation, I think the areas that deserve some caution are the rectangular pads north of [Shaw Environmental & Infrastructure Inc.’s] general limit of excavation line, that were excluded from the excavation,” he wrote Nov. 30, 2018.

A February 2019 report prepared by Terracon Consultants for Two Oak Ventures states “the risk of unforeseen conditions cannot be eliminated without completely removing the existing fill [soil] but can be reduced by following the recommendations in this report.”

The Shaw and Terracon reports both recommended taking high-hazardous safety precautions during excavation that include wearing flame-resistant clothing and blast shields, Aleshire said. He provided this information to the Workers Defense Project, which advocates for worker safety, but has not heard back nor does he believe these precautions are currently being taken at McKalla Place.

“The city is just being reckless about a potential safety issue, let alone a pollution issue,” Aleshire said.

When asked about the possibility of contaminated soil, Greeley said the team has no concerns and even conducted its own inspections.