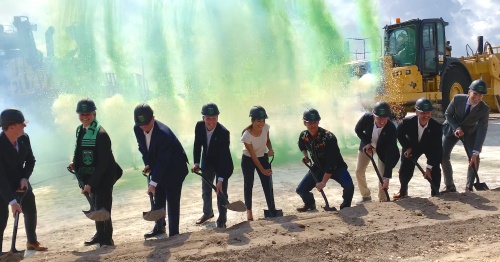 City officials celebrated alongside soccer fans and leaders from Austin FC to celebrate Sept. 9 the kickoff for construction on the Major League Soccer stadium in North Austin.

Austin Mayor Steve Adler, who was privy to early discussions about MLS pursuing Austin for a soccer team, said his city will no longer just be known for its live music and breakfast tacos.

“Soon we are the city that will be known as the home of Austin FC,” he said.

Austin FC, with FC standing for football club, will be the 27th MLS team in the U.S. The 20,500-seat stadium will take about 18 months to complete and is slated to open in spring 2021 at 10414 McKalla Place near the intersection of Burnet Road and Braker Lane.

“This is going to be a year-round stadium for soccer matches, for cultural events, [and] it’s going to be a soccer park on non-game days,” said Anthony Precourt, the managing partner and CEO of Two Oak Ventures and Austin FC. “We’re building this stadium to be fan friendly. It’s all about fan comfort, shade protection, technology. … It’s 100% privately financed. We’re going to build this for the city of Austin.”

“We want a team, we want a stadium, and we want an experience that grows the legend of Austin, Texas, and all of us who call this place home,” McConaughey said. “How do we do that? Well like the Live Oak, which is our emblem, it’s going to take strength and resolve, [and] like a legendary band, we’re going to have to listen to each other.”

Austin FC has only secured its first permit to clear the land for the groundbreaking and has not yet received approval of the site plan for the 24-acre piece of land. Features of the new stadium and soccer park will include 8 acres of open green space, a canopy for shade, natural grass turf, climate-controlled club lounges and about 835 parking spaces, according to the team.

Precourt said he did not know when the traffic and event management plans would be completed and released. Under the terms of the deal with the city, the team only has to complete them before the stadium is substantially complete.

He said Two Oak is also still working with Foundation Communities to develop 130 affordable housing units on the site, but he did not have further details.

Adler said Precourt is already making good on some of the promises from the deal it has with the city, including providing $500,000 for affordable housing, launching youth programs and creating jobs in the community.

“With so many things that are going so right within this community, we still are a community that is segregated more than it should be,” Adler said. “We don’t have enough events in our community that bring everybody in our community together in one place with one mind and one focus and one spirit. That’s what [Austin FC] represents.”