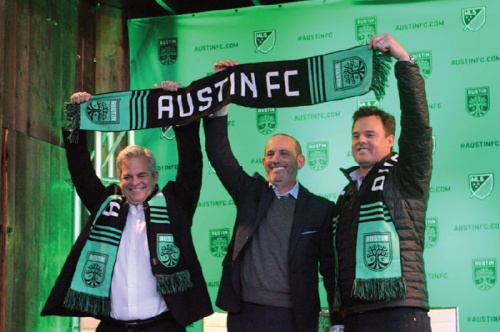 It was announced July 17 Two Oak Ventures will formally replace Precourt Sports Ventures as parent company of the soccer club. Anthony Precourt (right) will retain his role as chairman and CEO of the company.

Two Oak Ventures will formally replace Precourt Sports Ventures in the role overseeing Austin FC and its related assets, which include the stadium at McKalla Place as well as upcoming training facility St. David’s Performance Center, according to a news release.

Anthony Precourt will retain his role as chairman and CEO of the new ownership group, according to the news release.

Precourt said the team will soon announce “a prominent group of local Austinites” who have joined the investment group at Two Oak Ventures.

“Given MLS’s growth trajectory, to be successful and compete for championships and to realize our full ambition as a soccer club, we have to be more than a soccer club. Two Oak will help us realize that vision. Bringing in strategic, local investors will also play a key role in this evolution,” Precourt said in the news release.

The ownership group also stated in the release it “will be looking to post jobs for local residents,” though Austin FC did not expand on what those jobs will be or when they will be posted.

Community Impact Newspaper has reached out to Austin FC for comment and will update this article as more news becomes available.
SHARE THIS STORY