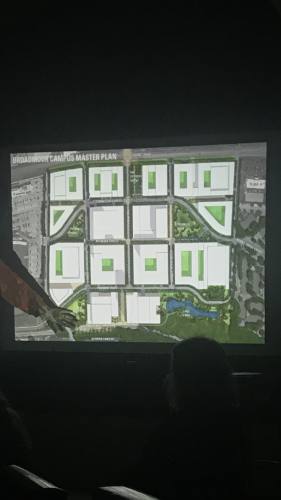 The IBM Broadmoor Campus redevelopment allows space and transportation opportunities that comply with Amazon's request for an HQ2 bid.

“We’re still waiting to hear back [from Amazon]. There’s not a lot of places that could accommodate it. The Domain area is one of them,” Redd said following a presentation to the Gracywoods Neighborhood Association on Tuesday.

The property occupies 1 million square feet on 66 acres along Burnet Road just east of The Domain. Brandywine Realty Trust, the Pennsylvania-based real estate firm that bought the campus, plans to redevelop it into a mixed-use property that would include office and residential space as well as two hotels, said Dave Anderson of the Drenner Group, the firm representing the developer.

With Amazon’s bid requests including a desire for close proximity to public transportation as well as up to 8 million square feet of space, the Broadmoor campus development site appears capable of supporting the online commerce company's demands.

Developers plan to request a zoning change from Austin City Council to allow for taller structures to be built on the site, which would expand the property's capacity, Anderson said.

“Brandywine or anybody else could redevelop this site, under the existing North Burnet Gateway Plan to be 8 million square feet, so its not even being maximized from a pure numbers perspective,” Anderson said.

Developers are also working with Capital Metro to incorporate an additional rail station on the property beyond the Kramer lane station as well as bus stops within the campus. In collaboration with the Austin Urban Trails Project, which is planning a trail connecting Braker Lane to the Kramer Rail Station, developers hope to add connections along the trail to the new rail station and the rest of the campus.