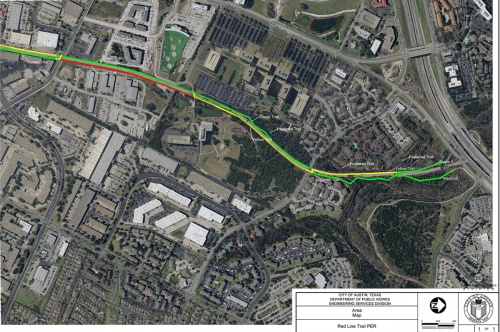 The city of Austin is proposing a new trail in North Austin that would run along Capital Metro's MetroRail line and connect to the Northern Walnut Creek Trail.

The trail, dubbed the Red Line Trail after the MetroRail Red Line, would be part of the Austin Urban Trails Project that eventually aims to connect the Austin area though a system of 360 miles of public trails. Organizers from the project held a public meeting Wednesday as a chance for area residents to provide input. Here are four things to know.


1. The Red Line Trail aims to serve commuters as well as recreationalists

The $4.3 million trail, funded by the 2016 mobility bond, would run adjacent to the Red Line from Braker Lane, past the Kramer MetroRail Station and to the Northern Walnut Creek Trail near MoPac.

"There are higher densities around of apartment complexes and more likelihood for people to use it to commute on the train or even go to The Domain," Urban Trails Program Manager Janae Spence said. "We're expecting higher numbers than we are for Southern Waller Creek and Northern Waller Creek."

Tom Wald, a Central Austin resident who works in North Austin, said he is hopeful this trail will increase connectivity between the two parts of the city.

"This area is not so far from Central Austin, but it's really difficult to get here on foot or by bike," he said.

Currently, the trail may be constructed within 25 feet of the middle of the railroad tracks, Spence said. In some sections of the proposed trail, it may be difficult to construct the trail.

If Capital Metro chooses to expand rail service to two tracks, the space available for the trail will be more constricted, Spence said.

A section of the proposed trail runs along the backside of IBM Corp.'s Broadmoor campus. Officials with the Austin Urban Trails Project have coordinated with the real estate company that owns that land, Brandywine Realty Trust, to determine how the project would fit into a potential mixed-use development proposed for campus, Spence said.

“They love the fact that there is going to be a trail," Spence said. "They want to put perhaps put a rail stop there as well, so they are [supportive of] transit and active transportation in general."


4. The project timeline includes another chance to provide input

City staffers will incorporate community input to develop a preliminary engineering report that evaluates environmental constraints, such as drainage, wildlife habitat and property ownership. Staffers will finalize the plan by the spring and hold another public input meeting. The project will go out for construction bids in fall 2019 and construction would begin by early 2020, according to project organizers.