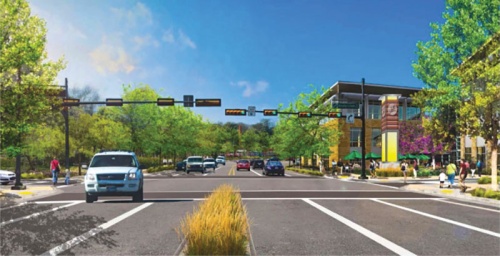 Cedar Park is working on realigning a portion of Bell Boulevard, or US 183.

The city of Cedar Park is one step closer to finding a master developer for the Bell Boulevard redevelopment project.

The project is intended to realign less than a 1-mile section of US 183, or Bell, along what is currently Old Hwy. 183. The area around the present Bell will be redeveloped as a mixed-use district between around Buttercup Creek Boulevard and Park Street.

The city plans to select a partner to develop the now city-owned property along US 183 within the district.

Cedar Park announced Monday that the master developer selection process had been narrowed down to two developers, Centro Development and RedLeaf Properties. Both companies will be invited to submit answers to a request for proposals issued in September, according to a statement from the city.

“We are thrilled to have two such prestigious development firms – RedLeaf and Centro – competing for this opportunity to transform the Bell Boulevard District into an exciting destination for our community,” said Katherine Caffrey, Cedar Park’s assistant city manager, in the statement. “We are eager to see the vision that each firm brings to the table in the next stages of this process.”

The city expects to decide between the two companies later this year, with a comprehensive agreement negotiated in 2019, according to the statement.