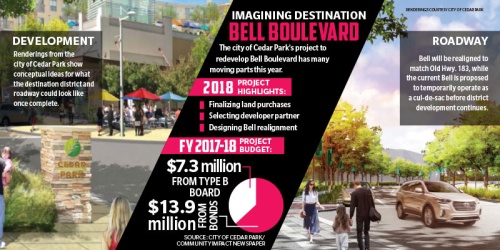 Editor's note: After this article went to press, Cedar Park City Council voted to increase the Type B Board budget for fiscal year 2017-18 allotted to the Bell Boulevard redevelopment project from $4 million to $7.3 million. The graphics on this story online have been updated to reflect the change.

The owners of La Adelita Meat Market said they now pay their monthly rent checks to the city of Cedar Park.

Samantha Rodríguez and her husband, Santiago Palomino, opened La Adelita Meat Market six years ago at 306 Bell Blvd. in Cedar Park. The land where their business is located was one of several properties sold to the city as part of the Bell Boulevard redevelopment project.

The city of Cedar Park began purchasing land for the Bell redevelopment in August of last year, according to city documents. The multifaceted project includes the realignment of a less than 1-mile section of US 183, or Bell, to what is currently Old Hwy. 183. The area around the existing US 183 from around Buttercup Creek Boulevard north to Park Street is then expected to be redeveloped as a “destination” district, a mixed-use center with residential, retail, restaurant and park components.

Rodríguez said their new property manager, hired by the city, said they would have around two years to vacate the property. At first, they were stressed about what this might mean for La Adelita Meat Market, but ultimately accepted that they will lose the location for their business, she said.

Rodríguez and Palomino said their primary option for when the lease is up is to move to Tennessee, where he has family, unless they can find a space to rent nearby, between New Hope Drive and RM 1431. Otherwise, it would be like starting their business from scratch because they could lose their regular customers, Palomino said.

PREPARING FOR REDEVELOPMENT
This year the city expects to work on selecting a developer partner for the first phase of the redevelopment while simultaneously designing the Bell roadway realignment, according to Cedar Park documents and Assistant City Manager Katherine Caffrey.

"We began strategically acquiring certain parcels in the area that we felt like were going to be a good return for the city and for the project as a whole," Caffrey said.

She said it is “very likely” that a master developer would demolish the buildings on the land purchased by the city for the project, such as the building where La Adelita is located, once lease agreements with tenants are expired.

“We are allowing these businesses to keep operating for anywhere between two or three more years dependent on the property and where it falls in the project, [to allow] planning and continuity for the business community,” Caffrey said. “Rather than abruptly finding out their property has sold and they need to vacate, they are given the opportunity to continue operating with ample time to make plans."

Since August, Cedar Park City Council authorized the purchase of property along both sides of Bell and on the intersecting road, Commercial Parkway. Caffrey said the city is still working on finalizing property acquisition along Bell, which could be complete by the end of April. All of the property purchased was from a willing landowner, she said, and the city did not use eminent domain. Eminent domain may occur in relation to the roadway realignment portion of the project, she said.

Tiaras and Tea Parties Owner Emily Lamphear has rented space for her business in Village Belle, a strip center purchased by the city, for around a year. She said that she has been looking at other properties and thinks she may have to leave Cedar Park for Leander because of expensive rent. With rising costs, Lamphear said small businesses are being driven out of Cedar Park.

Another tenant at Village Belle, Cedar Park Tech Chiropractic Clinic’s owner, D.R. Steuerwald, agrees.
“Anything that has any kind of soul other than Applebee’s is destroyed,” he said.

Despite this, Lamphear said she feels positively about the project overall, including the walkable shopping streets and park. She said that there are a lot of run-down parts of Cedar Park that could use renovations.
“If I wasn’t a business owner that was right smack in the heart of it happening, I’d think it was awesome,” she said. “As a small-business owner, I’m not too stoked, but I think Cedar Park does need a face-lift.”

As the city finishes acquiring land for the destination district, it will begin the first part of the developer selection process in April or May. Caffrey said the city is working on issuing a request for qualifications for the master developer, and based on the responses will issue a request for proposals in the summer by invite only.

“That will be where we’re getting more into the nitty gritty of developer proposals and concepts, and then hopefully by the end of the year we will have a master developer selected,” she said.

REALIGNING THE ROAD
The city of Cedar Park and the Texas Department of Transportation are working together to realign US 183 and Old Hwy. 183, creating what could be called West Bell and East Bell.

TxDOT held an open house about the project, which is in the preliminary design and engineering phase, on March 20. According to meeting documents, through traffic would travel on the realigned East Bell, separated from commercial traffic on West Bell. City and TxDOT documents state traffic flow changes are not expected to occur until late 2019 or 2020, with construction complete in 2021 or 2022.

Since traffic has been increasing on Bell since the 1980s, safety for both vehicles and pedestrians on the roadway has fallen, according to the TxDOT documents. The split of traffic aims to improve safety and also matches what the public indicated favor for during the master plan process for Destination Bell Boulevard, according to the documents.

Caffrey said West Bell is proposed to temporarily operate as a cul-de-sac for a few years before further construction on the development district takes place, creating a web of new roads between Park and Buttercup Creek. The cul-de-sac will allow access to the businesses along the West Bell in the meantime, Cedar Park Director of Engineering Darwin Marchell said.

“[The Bell redevelopment] project will take up to a decade for full implementation, [and] we need to make interim plans,” Caffrey said.

Palomino said that if the cul-de-sac is implemented while La Adelita is still on Bell, it would affect business “100 percent.” Along with construction in the area, the cul-de-sac could lessen drive-by traffic, and Palomino said all of their business is from walk-in customers.

Tony Moline, president and chief executive officer of the Cedar Park Chamber of Commerce, said the chamber would be starting a group for business owners in the redevelopment area to act as an intermediary for communication between the city and area tenants.

"It's meant to help support the current and future businesses of the Bell Boulevard redevelopment project," he said. "There's a lot [being] done with regard to making sure that the businesses stay healthy during that time and that we have the ability to make sure that access is always available to those businesses [during construction]."

The city is responsible for the realignment, which is funded by the city’s 2015 bond program, according to city spokesperson Jennie Huerta.

According to TxDOT spokespeople and meeting documents, construction on the roadway could, in addition to moving current traffic from Bell to Old Hwy. 183, or East Bell: widen East Bell from two to four lanes with a raised median; create center and right-turn lanes at intersections on East Bell; build an 8- to 10-foot path on East Bell; and install lighting and landscaping on East Bell.

“Once the new [eastern] roadway has been completed and is acceptable to TxDOT, then they will take over operation and maintenance of it, and then the old, the western Bell then will be deeded to the city from the state,” Marchell said.