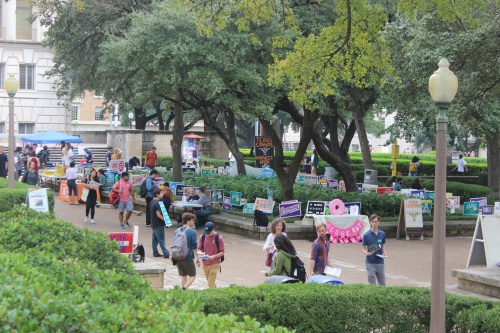 Students mill around the University of Texas campus on the afternoon of Election Day.

With all 34 district precincts reporting, Austin City Council District 1 candidates Natasha Harper-Madison and Mariana Salazar will face each other in a runoff election Dec. 11.

Neither candidate, however, received more than 50 percent of the vote, which is the requirement to avoid a runoff election. Salazar received 26.01 percent, while Harper-Madison received 25.07 percent.

Although Salazar is awaiting confirmation of the runoff, she said Tuesday evening that she is hopeful.

“I was the underdog,” she said, “and I’m super happy with the results.”

Harper-Madison, who could not be reached for comment, and Salazar were two of six candidates running for the District 1 seat.

Houston announced in June that she would not run for re-election.

Whoever replaces her on the dais will serve in the second term of Austin’s 10-1 City Council, which replaced the previous at large system. Since 2014 council members have been elected from 10 geographical districts in an effort to equalize representation across the city. The mayor is elected in a citywide race.

In addition to District 1, five other council seats were open this election. Mayor Steve Adler was re-elected with more than 60 percent of the vote. District 3 incumbent Sabino “Pio” Renteria will face Susana Almanza in the runoff election. District 5 incumbent Ann Kitchen ran opposed. District 8 candidates will also head into a runoff, although which two remains to be seen with two precincts yet to report. District 9 incumbent Kathie Tovo was re-elected to a third term, narrowly surpassing the runoff threshold with 52.87 percent of the vote.