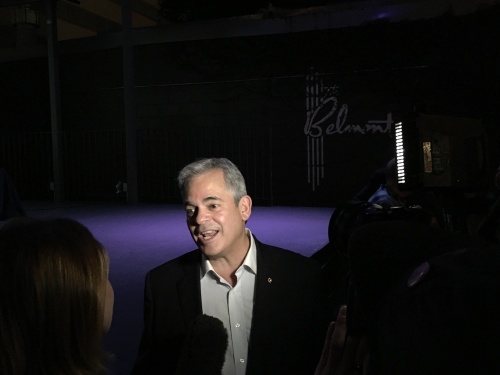 Mayor Steve Adler speaks to the media after winning his second term Nov. 6.

Incumbent Steve Adler will serve a second term as mayor of Austin after posting a lead in the early voting results that his closest opponent, former Council Member Laura Morrison, deemed insurmountable on Tuesday night.

Following early voting results and prior to reporting of any Election Day results, Morrison called Adler to concede victory.

“I’m real excited tonight. The size of the victory in the race was, for me, pretty breathtaking,” Adler said. “It’s a community speaking with a single voice, creating a real direction and expectation that we act in big ways, that we don’t look backwards and we don’t do things the way we did things in the past.”

As Election Day results began to come in, Adler's lead remained consistent. As of 10:30 p.m. Tuesday night, Adler had earned 9,864 of the 17,705 votes counted in Travis County, or 55.7 percent of the county's total Election Day votes. Williamson County, which also has a piece of the city of Austin, had not updated its Election Day totals as of 10:30 p.m.

Morrison, Adler’s main opponent throughout the election season, said she had no regrets about her “truly grassroots” campaign.

“When I saw the early vote came in, I gave him a call and congratulated him and offered any kind of assistance,” Morrison said. “I would be glad to give him a hand.”

Adler will again take the reins as leader of Austin’s policy-making body for a second four-year term. First elected in 2014, Adler was the first mayor chosen by the community to lead the 10-1 council—a city council system that operates through district representation. Prior to 2014, Austin operated under a system in which six council members and a mayor were elected by a citywide popular vote.

Heading into the 2019-22 term, Adler will continue to wrestle with the same issues that have plagued the community for years: mounting affordability and housing crises, an urgent need to update the land-development code, mobility gridlock and a growing homelessness problem. Also, the police department still does not have a labor contract following City Council’s rejection of the contract in December 2017.

Early voting results showed overwhelming support for the $925 million bond proposal, which includes a record-breaking public investment of $250 million into affordable housing. Adler said he was encouraged by the community sentiment but maintained that much hard work lies ahead.

“This is a community that is looking directly at City Council, saying: ‘We are giving you the mandate. We’re giving you the authority to actually do big things on mobility and affordability in this city,’” Adler said. “There is both tremendous excitement over the clarity this community has spoken with tonight, but also a real responsibility now to deliver on what the community wants.”