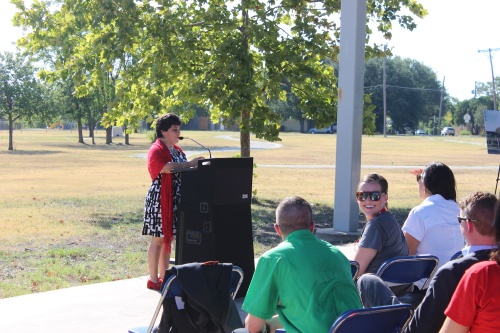 Students were relocated to other schools, according to an Aug. 23 news release.

In November 2017, AISD voters approved a $1.05 billion bond. It was the largest in the district's history and was directed toward modernizing and renovating 17 schools in need.

T.A. Brown will use $30.8 million of the bond funds to make necessary improvements as well as to modernize its campus with a special focus on outdoor learning.

Per the district's Facility Master Plan, students from Webb Primary School will attend T.A. Brown once the new campus is constructed. It is scheduled to open in January 2020.

"We have to make sure that our children get the best," T.A. Brown Principal Veronica Sharp said at the ceremony.

AISD Superintendent Paul Cruz emphasized T.A. Brown's mission to prepare its students for college and beyond.

"You're going to be here with [my] job because we're going to provide you with a 21st century education," he said to a group of students in attendance.