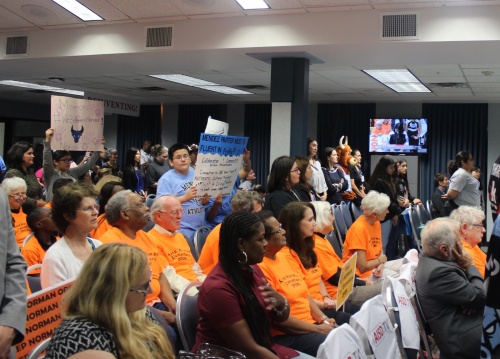 Austin ISD parents and students spoke in support of Norman and Sims elementary schools as well as Mendez Middle School during public comment at the AISD board of trustees meeting on March 26.

Austin ISD board of trustees met Monday evening for its monthly meeting. While the majority of the focus was on three schools in East Austin, the district also reviewed contracts for district renovation projects and recognized students for recent achievements. 1. Contracts selected for district bond project contractors
The board authorized Superintendent Paul Cruz to enter the district into multiple contracts with firms related to projects approved through the 2017 or 2013 bond programs or the fiscal year 2017-18 budget. Norman Elementary, located at 4001 Tannehill Lane in East Austin, was selected over neighboring Sims Elementary School, located at 1203 Springdale Road, Austin. Both schools are in need of upgrades and are underenrolled, according to district staff.

Trustee Ann Teich voted against the motion after suggesting the vote should be postponed an additional month to offer more opportunities for community engagement and feedback, she said. District 1 trustee Edmund T. Gordon, who represents the families with students at both schools, abstained from the vote.

While the future of Sims Elementary has not been made official, many residents during public comment feared that by selecting one school for modernization, the other school would close soon after renovations were complete. Residents asked the board to consider splitting the funding to partly modernize both campuses.

“I’m completely in favor of spending money on the facilities of our schools,” Gordon said. “I think in comparison to [the district’s] other schools and [nearby] charter schools, some of the schools in District 1 are in need of upgrade and modernization. Part of the fear in District 1 is that if we spend our resources on one school, that the other will inevitably be closed or sold.”

During the meeting, Cruz said the district would likely have to sell property to generate part of the modernization funding. Selling Sims Elementary is not the only option for the district but could be one.

While Norman Elementary is being modernized, students from both campuses will attend class at Sims Elementary. The district has not yet determined official student configurations and staffing. Austin City Council Member Delia Garza was one of many who spoke during public comment in support of Mendez Middle School, asking the board of trustees for an update on the school’s status. A full list for students recognized can be found here.