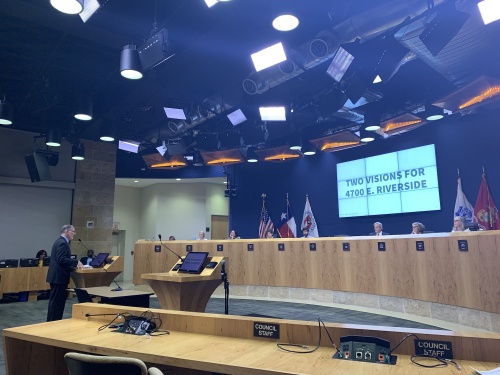 Michael Whellan, a local attorney representing the developers of 4700 Riverside, speaks at an Austin City Council meeting on Oct. 17.

Council Member Alison Alter abstained from the Oct. 17 vote, saying she could not condone how some opponents of the project "harassed" her colleagues and those associated with the developer, incidents that involved police. Council Member Kathie Tovo was absent.

The developer, a joint venture between Los Angeles-based investment firm Nimes Capital and Texas-based property management firm Presidium, requested zoning changes to include a mix of uses, taller buildings and the chance to participate in the city’s density bonus program.

The project, however, has been a source of controversy for months as council members requested more assurances of affordable housing and environmental protection in exchange for the zoning changes requested.

“You can’t freeze this site in amber,” said Michael Whellan, an attorney with the local firm Armbrust & Brown, which is representing the developer. “The redevelopment is going to happen.”

Council members expressed concern that the development will exacerbate displacement in an urban core neighborhood that remains relatively affordable while also acknowledging that new development is inevitable.

“I’ll tell you what, if I had the money, I’d build 100% affordable housing,” said Council Member Sabino “Pio” Renteria, in whose district this development will be located.

But Renteria added that gentrification will continue in the area because of market forces and state laws prohibiting protections such as inclusionary zoning. He said it is important for the city to negotiate the best terms—and the most affordable units—it can.

Defend Our Hoodz, a local advocacy organization, has engaged in self-described “militant resistance” to the project, which it calls the “Domain on Riverside.” Its members have protested outside the homes of Renteria and Whellan.

They also protested outside City Hall during the meeting, and their chants could be heard in council chambers throughout public testimony and discussion of the zoning case.

“Their whole goal is to disrupt,” Renteria said of the organization.

On Oct. 15, the University of Texas student government voted 24-4 to pass a resolution asking City Council to vote against the zoning changes or to provide more affordable student housing in the area.

UT Student Body President Camron Goodman told council that students felt left out of the conversation around this project, which largely occurred over the summer, “and now we want a seat at the table.”

Currently, the 97-acre site purchased by the developer houses 1,308 apartment units in five complexes, including student housing at the Ballpark apartments.

These units may be considered affordable among market-rate housing stock in Austin, but their affordability is not regulated, meaning their rents can go up, a city spokesperson said in March.

It is scheduled to be built in phases over the next 20 years, with a preliminary start date planned for 2023, and ultimately provide between 400 and 565 affordable apartment units to individuals who make up to 60% of the area’s median family income.

Fully constructed, it is expected to provide more than 10% of Del Valle ISD’s property tax revenue, per the same letter.

“Choosing to keep the existing zoning would virtually agree the property redevelops into a suburban-style development with little to no affordability or access to jobs and services,” Whellan said.

City Council approved the requested zoning changes on third reading, meaning that its members had already considered the application twice before and bounced it back to the developer to make adjustments.

In particular, council members wanted to guarantee affordable units would be built in exchange for increased height allowances. Some also wanted to codify protections for parkland on the site, which abuts the Roy G. Guerrero Colorado River Park.

Richard Suttle, an attorney with the local firm Armbrust & Brown, which is representing the developer, told council on Aug. 22 that affordable units will be guaranteed through a set of restrictive covenants enforced by a third party——affordable housing nonprofit Homebase of Austin—since the city cannot impose density bonus requirements beyond what is currently codified.

Additionally, the developer entered into a memorandum of understanding with the Ending Community Homelessness Coalition, or ECHO, to ensure units would be available to individuals exiting homelessness.

The developer initially committed to providing up to 10 units for this purpose before announcing on Oct. 16 that, contingent upon the zoning changes being approved, it would immediately provide housing for 100 people exiting homelessness for up to five years in addition to donating $1.75 million over that time period to fund support services for those same residents.

“We believe it would help set a meaningful precedent going forward,” Whellan said.