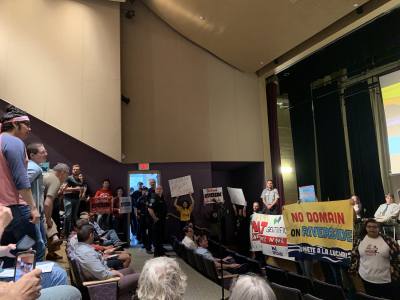 Before it even began, a March 27 community meeting hosted by the city of Austin to discuss a proposed project at the corner of East Riverside Drive and South Pleasant Valley Road erupted in protests, which led to multiple arrests.

The project is a collaboration between Dallas-based property management firm Presidium and Los Angeles-based investment firm Nimes Capital. Known as "Project Catalyst," it consists of a 97-acre “urban village” along the East Riverside corridor, a regulated area of the street stretching roughly from I-35 to SH-71 with specific zoning regulations approved by Austin City Council in 2013.

A local activist organization called Defend Our Hoodz, which advocates against gentrification and displacement, organized protesters, in part through a Facebook event.

Before the meeting began, protesters stood on the stage in front of city staff and around the room with signs and led a chant telling Michael Whellan, a real estate attorney with the local firm Armbrust & Brown, who is representing the developer, to leave.

They cited concerns about gentrification, displacement of affordable housing and destruction of parkland as reasons for their protest.

Austin Police Department officers arrived and arrested several of them for trespassing before the remaining protesters moved outside.

The intended focus of the meeting was the process triggered by the developers' application for zoning changes.

Because the zoning cases are adjacent to the planned road, the road would need to be built as part of the proposed development, according to an information packet distributed by city staff at the meeting.

An extension of Lakeshore Boulevard across Pleasant Valley would cut into “a sliver”—11,000 square feet—of Roy G. Guerrero parkland, said Upal Barua, a traffic engineer at the Austin Transportation Department.

Because the extension would go through parkland, it requires a separate approval process than the application for zoning changes.

Before the public comment portion of the meeting, Scott Grantham, zoning case manager for the Austin Planning and Zoning Department, addressed what would happen to the existing affordable housing in the area if the zoning application were approved.

“It it were approved as written, the apartments would eventually be demolished and replaced with new development,” Grantham said, adding the developer has stated the project would come online in phases, with a preliminary 20-year construction timeline starting in 2023.

There are 1,308 housing units in the area of the proposed zoning cases, according to Jorge Ortega, a spokesperson for the planning and zoning department.

The units may be considered affordable among market-rate housing stock in Austin, but their affordability is not regulated, meaning their rents can go up, Ortega wrote in an email.

Dozens of residents signed up to speak against the project following the presentation by city officials.

“Taking part of the park is just a horrible idea,” said Gordon Maxim-Kelley, president of the Waterloo Disc Golf Club, which uses the Guerrero Park as one of its home courses.

Susana Almanza, director of the local nonprofit People Organized in the Defense of Earth and Her Resources, called the city’s stance on the development “disingenuous."
SHARE THIS STORY