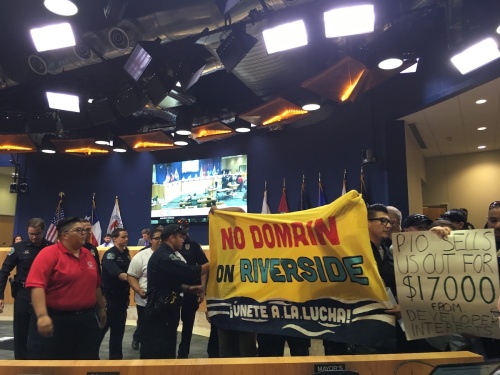 The 4700 East Riverside project has been a controversial development, giving rise to several protests. Protesters were escorted out during Austin City Council's Aug. 8 meeting.

The developer seeking zoning changes for a 97-acre mixed-use project planned at the intersection of East Riverside Drive and South Pleasant Valley Road will have to return to Austin City Council for a third time, after council members voted 6-5 to approve their request on second reading.

Council members expressed appreciation that the developer had heeded their earlier suggestions, but some still feel that the development—called 4700 East Riverside—will exacerbate displacement in an urban core neighborhood that remains relatively affordable.

"It is a large enough tract in an area that has not gentrified yet that this really can be a cause or an accelerator of gentrification," Council Member Greg Casar said.

Los Angeles-based investment firm Nimes Capital and Presidium, a property management firm based in Austin and Dallas, are developing the project as a joint venture and have requested to rezone the property to include a mix of uses, taller buildings and the opportunity to participate in the city's density bonus program.

Michael Whellan, a local real estate attorney with the firm Armbrust & Brown, is representing the developers. He presented the zoning changes requested at an Aug. 9 City Council meeting, when members voted 9-2 to approve the changes on first reading, pending certain changes were made.

In particular, council members wanted to guarantee affordable units would be built in exchange for the increased height allowances being requested. Additionally, council also wanted to codify protections for parkland on the site.

In response, the developer made a series of changes to ensure affordable units would be protected, said Richard Suttle, another Armbrust & Brown attorney who filled in for Whellan at the Aug. 22 hearing.

The city's density bonus program only applies to buildings that exceed 60 feet. Because members raised concerns that the developer could receive a height allowance above 40 feet but not be required to provide any affordable units unless their buildings exceed 60 feet, the developer chose to enter into a restrictive covenant with a third party—local affordable housing nonprofit HomeBase—to enforce the city's density bonus program requirements for the height increment between 40-60 feet.

The city cannot change its density bonus program requirements for a specific project or enforce them outside of the stated terms.

Additionally, the developer formally committed to reserve 10 units for people who are transitioning out of homelessness that will be paid for with vouchers supplied by the Ending Community Homelessness Coalition and to ensure 250 of the existing units on site will not be redeveloped or demolished for five years in an effort to defray displacement.

"We need to guarantee and have and work with these developers to get as many affordable units as we can get from them," Council Member Pio Renteria said, adding that the developer has committed to improve transit options along the corridor, which is congested.

Renteria supported the zoning changes on both first and second readings; the development would be in his district. "I just don't see it the way other people see it," he said.

The site currently houses 1,308 apartment units that are largely rented by students and considered affordable, despite not being formally income-restricted.

A local advocacy group, Defend Our Hoodz, has been a vocal critic of the project. At an Aug. 8 City Council meeting, when the zoning changes were first considered, a number of Defend Our Hoodz members were arrested.

The zoning hearing today was closed, meaning that public comment was not included.

The developer will return to council for a third and final hearing, at which it will need to receive at least six votes in favor to pass. Although it has not yet been confirmed, typically a third hearing will be scheduled for the next council meeting, which will be Sept. 19, a city spokesperson said.

Editor's note: This story previously referred to the development as "Project Catalyst." It is now called 4700 East Riverside.