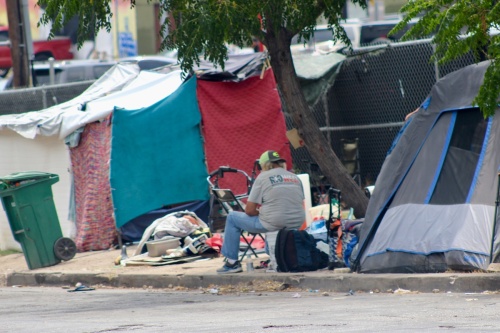 Austin City Council will not make any immediate changes to its decision to lift bans on public camping and sitting and lying down—rules which heavily impact the city’s homeless population—and has chosen instead to discuss the issue further before acting.

Following months of public input on council’s move to decriminalize camping, sitting and lying down, and after weeks of infighting over contrasting proposals on what changes to make to the ordinances, which Council Member Natasha Harper-Madison likened to “getting [their]teeth kicked in,” Austin City Council decided Sept. 20 they were not in a position to make any substantial changes to the ordinances.

With several proposals, alternative proposals and disagreements on key points still persisting, council members expressed frustration, exhaustion, and discomfort with how the process was playing out as they prepared to discuss the proposals and take a vote.

The decision to postpone a vote came after City Council sat through roughly 8 hours of tense and emotional public testimony on the issue just this week.

City Council tentatively scheduled another work session on the issue for the week of Oct. 10.

On June 20, Austin City Council voted 9-2 to decriminalize public camping, sitting and lying down, ordinances legal experts said criminalized the existence of homeless persons and, potentially, according to some court decisions in other parts of the country, violated the Eighth Amendment of the U.S. Constitution—the protection of citizenry from cruel and unusual punishment. The June decision pushed the local homelessness issue into the civic spotlight this summer.


Parsing through the details

There seemed to be a consensus among City Council Members that change was needed; however, they did not find agreement on much else. Over the last two weeks, council had been working through two different ordinance proposals from two different groups of council members as well as through a resolution aimed to direct City Manager Spencer Cronk to initiate a number of programs aimed at homelessness services, opening more shelters, adding funding and placing further restrictions on structures and materials within homeless encampments.

The two ordinance change proposals found some agreement, but council members differed over how to restrict camping and sitting and lying down on land around creeks and rivers; areas at high risk of wildfire; sidewalks and roadways; and the boundary around the new South Austin homeless shelter. Members also differed on when to put up signage restricting the acts in certain areas and when to impose further restrictions.

The most polarizing aspect of the ordinance was the question of bans for sidewalks and roadways. Where one proposal sought to restrict sidewalk and roadway access on specific strips of roadway in West Campus and parts of downtown, others proposed simply implementing a 4-foot clearance rule, meaning that as long as a 4-foot portion of the sidewalk was open and passable, camping and sitting and lying down in that area would be permissible.

Austin Police Department Asst. Chief Justin Newsom objected and said the rule would require officers to carry tape measurers. He said it would be impractical but said he was not sure what impact it would have; tape measures, he said, are equipment that officers have never before had to carry. Newsom said it would be easier and more practical to enforce a restriction on sidewalks outright. He also said he was concerned about the prospect of having to prove a violation of the 4-foot rule in court.

Newsom also expressed concerns about another piece of the ordinance that would require police officers to contact the city’s Homeless Outreach Street Team—city employees who work to connect the homeless to services—when someone does not comply with certain camping and sitting and lying down restrictions.

Coupled with the ordinance change proposals was a proposed resolution from Kitchen and Tovo to direct the city manager to initiate outreach programs to help people in homeless encampments, regulate the structures used to build encampments and explore the possibility of using the city-owned HealthSouth building at 1215 Red River St. as an emergency homeless shelter.

Council Members Jimmy Flannigan, Paige Ellis and Pio Renteria objected to the resolution, which would have given specific direction to city staff, because they felt they should wait for expert guidance from the newly hired Homelessness Strategy Officer, Lori Pampilo-Harris, who started Sept. 9. The dissenting council members said they thought it would be counterproductive to give direction to an expert employee who was hired to give City Council direction.

City Council will look to reconvene on the issue of homelessness the week of Oct. 10, according to Mayor Steve Adler; however, nothing has been scheduled.