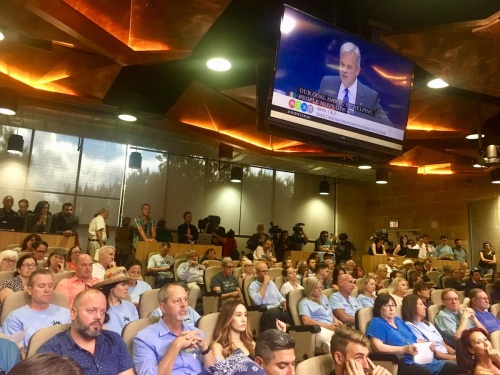 Austin City Hall's City Council chamber was packed Wednesday, Sept. 18, as the public weighed in on possible changes to how the city regulates public camping and sitting and lying down.

Back in June, Austin City Council moved to decriminalize public camping and sitting and lying down in an effort to reduce barriers for those trying to exit homelessness. Although many place homelessness as the top priority in the city, City Council’s move divided the community and now, three months later, City Council is discussing possible changes to the ordinances.

In a special-called City Council meeting Wednesday, Sept. 18, residents were invited to weigh on the proposed changes before the elected officials make a final decision, scheduled for Friday, Sept. 20.

Last week, two groups of City Council members offered alternative proposals on how to adjust the city’s general decriminalization of public camping and sitting and lying down. The first, put forth by council members Kathie Tovo and Ann Kitchen, and supported by council members Alison Alter and Leslie Pool, looked to reimpose restrictions in downtown, West Campus and parts of East Austin. Their proposal asked the city manager to enforce rules on camping structures and explore the installation of public restrooms and garbage pick up.

The other proposal, offered by Mayor Steve Adler and Council Member Greg Casar, supported by council members Pio Renteria, Delia Garza and Natasha Harper-Madison, was much less restrictive and, unlike the Tovo/Kitchen proposal, did not seek to prohibit camping, sitting and lying down on whole streets outright.

District 6 Council Member Jimmy Flannigan said he was frustrated with the path council was on and likened the proposals to “putting lipstick on a pig.”

“We’re not going to solve this as a council, the 11 of us creating policy from the dais,” Flannigan said. He said the city needs to rely on the guidance of its newly-hired homelessness strategy officer and that, in order for progress to be made, the city needed data and metrics for success. Adler made similar comments, saying the city lacked an actionable plan and detailed schedule for how to enact initiatives and make investments.


A divided public weighs in

The packed crowd inside City Council’s chambers reflected a wide spectrum of Austinites, including those experiencing homelessness, civil justice advocates, homeowners, University of Texas campus representatives, parents, members of faith communities and homeless service providers. The diverse crowd clashed at certain points, cheering for speakers they agreed with and denigrating those with whom they disagreed. On multiple occasions, city council paused and tried to manage and reason with the audience.

“It has been an absolute mess for this city,” Mackowiak said. “I say that more with sadness than anything else. I don’t doubt your intentions. The intention of trying to decriminalize homeless existence was a noble one. Unfortunately, you made our city less safe and today you are admitting it.”

Susan Spataro said she was disappointed by City Council’s decision to decriminalize public camping and sitting and lying down, as she and her neighbors felt it failed to consider and protect their constituents.

“I don’t think you understand how unhappy the citizens of Austin, Texas are today,” Spataro said. “This is not partisan politics; it is not age; it is not how much money you make. It is, ‘What has happened to our town?’ Many people in south Austin, like, three I know, already moved out. They don't want to live in Austin anymore if this is what it is like. We did not elect you to do that.”

George Scariano, co-owner of the local Royal Blue Grocery, said he and his employees have had a “compassionate and complicated” relationship with the homeless population. Scariano said, as of late, the homelessness situation has made his employees and customers feel unsafe, and he is considering closing his store at Sixth Street and Congress Avenue at 6 p.m.—six hours early—to protect customers and staff.

However, others objected to any tweaks to the rules that would re-criminalize public camping and sitting and lying down anywhere in the city. Emily Gerrick, senior staff attorney with the Texas Fair Defense Project reminded City Council that its repeal of the ordinances back in June was influenced by legal opinions in other areas of the country.

“The reason we had to [repeal the ordinances] was not just because it was counterproductive and inhumane but it was actually unconstitutional and … violated the Eighth Amendment against cruel and unusual punishment and criminalized the status of being homeless,” Gerrick said.

Back in 2017, the city auditor released a report criticizing the city’s ordinances as not only creating barriers to exiting homelessness but as possible violating the Constitution—according to some legal opinions by judges across the country—and could make the city vulnerable to lawsuits.

Chas Moore, with the Austin Justice Coalition and a vocal advocate for social justice reform in the city, said he was disappointed with the inability of the community to come together on the issue.

“I think it’s really sad in a city, where we’ve been deemed the progressive haven of the south and [with an issue] where we’re talking about basic humanity and needs, we can’t seem to come to the table,” Moore said. “Here we are talking about actual human people and we want to hide them. When has ever hiding anything solved any issue in this country?”

City Council will reconvene at 9 a.m. on Friday, Sept. 20 to deliberate changes to the ordinance and take a final vote.