In win for homeless advocates, Austin loosens laws against public camping, solicitation, sitting and lying down 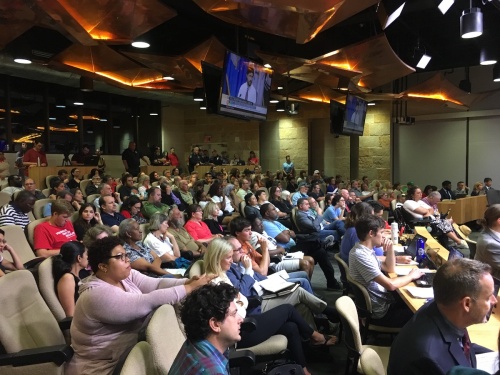 Austin City Council's June 20th decision to loosen its laws around public camping, sitting or lying down in parts of the city and solicitation drew a capacity crowd at City Hall.

In another major move for the city’s progress on its homelessness issue this year, Austin City Council has loosened its laws around public camping, solicitation and sitting or lying down in some areas of the city, ordinances that critics say target Austin’s homeless population.

Some, however, represented at the June 20th City Council meeting mostly by downtown stakeholders and the University of Texas community, called the move premature, suggesting that the city first gather more resources to house, shelter and help the homeless population before loosening the laws.

City Council listened to more than three hours of public testimony on a topic that’s been a growing focus since a 2017 city audit highlighted the city’s no-camping, no-sit/no-lie and no solicitation laws as regressive, ineffective and inefficient in the city’s efforts to address homelessness.

District 4 Council Member Greg Casar, who led council’s push to loosen the laws, said the city cannot continue perpetuating injustice just because they have not fixed everything yet.

“If we care about safety and social justice, we cannot look away from these laws,” Casar said. “Our failures start when we stop looking at people as people. The work is about looking at our neighbors, both housed and not housed, as folks.”

With the change, police chief Brian Manley said people who set up tents or camping structures in the city that are not blocking a passageway will not be subject to police enforcement. Manley said homeless encampments that are not on private or homeowner association property would be allowed to exist; however, camping in city parks would remain prohibited.

Critics of the long-standing ordinances pushed to ensure the city was not criminalizing a homeless person’s existence and, as many put it, their biological functions of needing rest and sleep.

Some council members supported the changes to the no-solicitation and no-sit/no-lie but expressed concern over loosening the camping rules. Council Members Kathie Tovo, Alison Alter and Ann Kitchen said they were concerned about people setting up tents on city sidewalks. Tovo said she felt the city could do better and urged the City Council to wait until the city manager came back with recommendations on safe camping areas in each City Council district; however, the majority of council did not agree. The city manager will, however, come back later this summer with recommendations.

The 2017 audit reported out of 18,000 citations issued between 2014-16, people frequently did not appear in court, often leading to arrest warrants, which could hurt a person’s prospects for an apartment or job. The audit also highlighted constitutional violations baked into the ordinances, such as the freedom of speech breach by the no-solicitation law.

Representatives of the Austin chapter of the Democratic Socialists of America said they knocked on thousands of doors in organizing community support for the ordinance changes. Those who have personal experience with homelessness also showed up to advocate for change.

“I don’t want to see anyone strung out on K2 in front of Maggie Mae’s,” said Steve Potter, an Austinite who has been homeless for several years. “But ticketing someone for it does not solve that.”

Alvin Sanderson, another Austinite who has been homeless, said the existing laws against camping force people into hiding in dark places around the city.

“A lot of people just want to be in the light, the light is safety,” Sanderson said, who has lost several friends who he said have been forced into dangerous living situations because they were afraid of sleeping somewhere where the police could find them.

Those who objected to changes chronicled traumatic encounters with homeless people, further expressing fear of assault, sexual assault, robbery, and rampant drug use. Council members emphasized that such criminal acts would remain illegal and the ordinance changes would unbundle the simple act of being homeless from criminalization.

“Nothing we’re doing here today is intended, in any way, to minimalize or decriminalize actual threats of public safety risks or hazards,” Mayor Steve Adler said.
SHARE THIS STORY