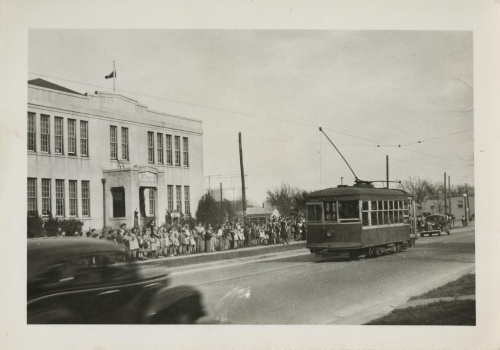 Amid a proposal from Travis County commissioners to swap ownership of the Palm School site with the city of Austin, Fairmont Austin Hotel financier Douglas Manchester announced plans to offer an intent to purchase the land surrounding the school—not including the adjacent Palm Park—for potential commercial development.

“The Palm School is included in the vibrant history of this land marked area,” Manchester said in a news release updated July 15. “We are determined not to lose the school or the priceless value of our legacy.”

Manchester is president of the Manchester Texas Financial Group, which developed the Fairmont Austin Hotel; it neighbors the Palm School site. Manchester is being represented by attorney and state Rep. Sheryl Cole, D-Austin.

In addition to announcing his plans to offer an intent to purchase—a nonbinding real estate letter used to document progress toward a sale and to help secure financing—Manchester also pledged to donate $5 million to Travis County to help the local government entity maintain ownership of Palm School.

The local grassroots organization Save Palm School wrote that his proposal “violates the integrity of our community’s request to preserve and protect” the property and that his contribution is a “disingenuous” one meant “to bully and buy [his] way into current negotiations between Travis County and the city of Austin” in a July 13 Facebook post.

Established in 1892, Palm School is a former elementary school that served predominantly Latino students; most recently, the building was used as office space for the Travis County Health and Human Services Department, which will move to a different location in 2021.

The park is currently being redeveloped by the Waller Creek Conservancy as part of a wider effort to create a new parks district in Austin.

Over the last year, county staff have been in the process of drafting recommendations for the future of the Palm School building.

On June 4, commissioners approved a set of restrictive covenants—essentially guidelines for future use, no matter who ultimately owns the property—that include requirements to pursue national and state historic designation for the school building, complete restoration work before any new construction can take place and keep up with ongoing maintenance.

Perhaps more significantly, the restrictive covenant also requires that 80% of the property’s space that can be occupied be dedicated to cultural heritage or community uses while maintaining that the primary area must be available and open to the public.

“There has to be a commitment to preserve Palm for its cultural value and for the future, to not erase the cultural significance of that site,” Precinct 4 Commissioner Margaret Gomez said.

Prior to that, on May 23, Austin City Council approved a resolution urging Travis County not to sell the Palm School or the surrounding site.

On July 3, County Judge Sarah Eckhardt proposed in a letter to City Manager Spencer Cronk and Austin City Council members that the county swap ownership of Palm School, which was recently appraised to have a market value of $53 million, with the restricted covenants taken into consideration.

In exchange, the city would offer ownership of the former HealthSouth physical rehabilitation facility, which the Travis Central Appraisal District assessed to have a market value of $20 million in 2019; the Travis County Exposition Center, which it leases to the county; and a portion of the local hotel occupancy tax that is statutorily available to—but has not yet been claimed by—the county.

“Travis County is gratified the City’s interests align with the County’s in the restoration, preservation and programming of Palm School as an historical and cultural resource,” Eckhardt wrote.

In her view, the city is “the better institutional entity” to do so because of the broader statutory authority and revenue options that cities have—and counties do not—in regard to historical and cultural preservation.

The county seeks the HealthSouth property—which aligns with ongoing efforts nearby, such as the Brackenridge campus redevelopment and the recently opened Sobering Center Austin—to bolster its behavioral health options outside the context of its civil and criminal justice systems, Eckhardt continued.

Additionally, the county could redevelop the Expo Center property, with the city’s cooperation and hotel occupancy tax revenue, as an enhanced sports and entertainment center, employment hub and community resource.

“This proposed swap is not radical,” Eckhardt wrote, citing, among other examples, the transfer to the city of the county’s Tannehill property, on which the Salvation Army now operates its Rathgeber Center for Women and Children shelter, and the Sobering Center of Austin, a nonprofit that operates out a building donated by Travis County and with an operating budget funded by the city of Austin.

A city spokesperson said July 15 that city staff are in “early discussion” with Travis County regarding the proposed swap.

“Trying to negotiate by letter, as you initiate, is just a form of negotiation that does not work with the Council,” they wrote. “The City Council is in recess for the month of July 2019, so [it] cannot act as group; further the Open Meeting laws prevent a majority of Council from even discussing your letter with one another.”

The county judge requested that the city manager respond to the offer to negotiate by July 31.
SHARE THIS STORY