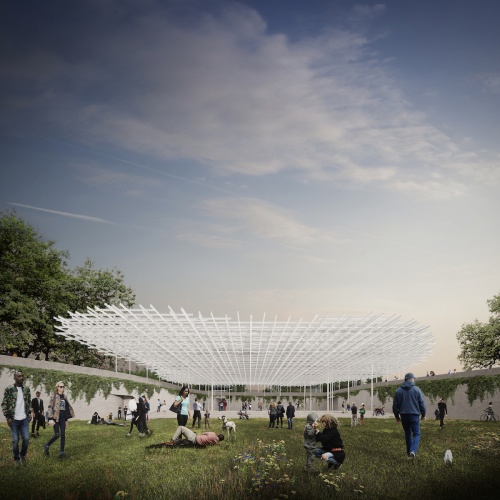 The new amphitheater, partially funded through a $15 million gift from the Moody Foundation, will be completed in 2019.

Editor's note: This story has been updated to reflect more accurately the percentage of funding raised for this project.

The Waller Creek Conservancy celebrated the official ground breaking of the Waller Creek project at Waterloo Park on Wednesday morning. The project consists of a chain of urban parks along the restored Waller Creek in downtown Austin, running 1.5 miles from Lady Bird Lake to 15th Street between Trinity Street and I-35.

When complete, in approximately 10 years, the parks will cover 37 acres. The project is estimated to cost $230 million.

The Waterloo Park phase of the project is the largest and is projected to open in late 2019 and cost $64 million.

The Waller Creek Conservancy has raised more than 60 percent of the costs for Waterloo Park through a combination of city of Austin funding and private donations.

The landscape architectural firm Michael van Valkenburgh and Associates, selected by a competition jury organized by the Conservancy, will design the parks according to a plan adopted by the Austin City Council in 2013.

In 2015, the conservancy hired CEO Peter Mullan, former executive vice president of Friends of the High Line. The High Line is a public, elevated and linear park in New York City that was built on the former New York Central Railroad track. Since opening in 2009, it has seen more than 4.5 million visitors annually and served as a model for urban planning, innovation and design, he said.

"Waller Creek will represent a new kind of public open space for the city of Austin, but one that taps into Austin's core DNA," Mullan said in a news release. "Waller Creek will be a place where members of the entire community can come together and celebrate their shared identity as Austinites."

The finished project will feature 3 miles of new bicycle and pedestrian trails, art exhibition spaces, an amphitheater for musical and cultural performances and educational community programming.

Council Member Sabino "Pio" Renteria grew up playing in Waller Creek, attending the nearby Palm School and playing in Palm Park. He spoke to the crowd at the groundbreaking, saying he remembers seeing a cat swim across the creek as a child through the crystal clear water.

"There is a rich history of community here and the Waller Creek Conservancy builds on that tradition of connecting people to one another in a natural, outdoor setting," Renteria said in the release.