Water rates in turmoil amid disputes over groundwater 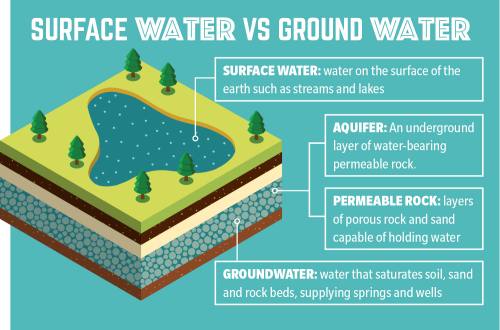 Water rates in south Montgomery County are in flux this year from uncertainty about how much power local governing entities have over groundwater regulations, which officials said help prevent land subsidence.

In June, the San Jacinto River Authority, which conserves and develops the river basin, announced its water use rates would increase Sept. 1 for fiscal year 2019-20. The change affects water bills of residents of The Woodlands Township and other entities participating in the SJRA’s Groundwater Reduction Plan, such as Oak Ridge North.

The water rate changes are related to ongoing disputes about the authority of regulatory entity Lone Star Groundwater Conservation District, which limits the amount of groundwater extracted from local aquifers, SJRA General Manager Jace Houston said. LSGCD is working on new groundwater regulations this year after its previous plan was rejected by the Texas Water Development Board in May.

“Changing the rules is costly for utilities, cities and MUDs [municipal utility districts],” Houston said. “Ultimately everyone’s water bills go up, not down.”

Efforts to reduce groundwater extraction were intended in part to reduce land and property damage due to subsidence, which occurs when aquifer water levels drop, causing land to sink, said Mike Turco, the general manager of the Harris-Galveston Subsidence District, a special service district that regulates  groundwater withdrawal.

Turco said the issue is of particular concern in areas of heavy development such as The Woodlands, which also has numerous fault lines that can be activated by subsidence, causing movement that can result in property damage.

“The question moving forward is are the regulations going to change by [the LSGCD], and what would that impact be?” Turco said.

The SJRA rates are increasing, and the LSGCD rates are decreasing, but many local water customers will likely end up with higher water bills as a result, officials said.

The rates changed Sept. 1, which could translate to about a 50-cent increase on an average $50 water bill from MUDs that are part of The Woodlands Joint Powers Agency in The Woodlands, WJPA General Manager Jim Stinson said.

The SJRA’s rate increases will not affect Shenandoah residents because the city does not purchase water from the SJRA as part of its Groundwater Reduction Plan, Public Works Director Joseph Peart said. Oak Ridge North participates in SJRA’s GRP, and although it is not raising its water rates, the increases are passed on as part of the fees on residents’ water bills, City Manager Heather Neeley said.

In 2016, the LSGCD mandate went into effect requiring large-volume water users to decrease their groundwater usage by 30% of their 2009 groundwater usage. This forced cities, MUDs and other governmental entities such as the The Woodlands to participate in Groundwater Reduction Plans to manage groundwater resources.

Since then, the region has shifted some of the groundwater extraction burden away from local underground water sources. In 2015, the SJRA began drawing surface water from Lake Conroe through its own GRP, which included the creation of a surface water treatment facility on Lake Conroe that cost nearly $500 million to build, said Heather Ramsey-Cook, the SJRA’s director of communications and public affairs.

The facility sends surface water from Lake Conroe to large portions of the county, including The Woodlands.

However, the LSGCD mandate to reduce groundwater usage by 30% was ruled unenforceable by Judge Lamar McCorkle in May. That same month, the TWDB rejected the district’s groundwater management plan because the district did not include the Desired Future Conditions plans the TWDB required from 2010, adding another layer of regulatory confusion, LSGCD General Manager Samantha Reiter said. The DFCs outline the quantifiable condition of groundwater resources at a future time, according to the TWDB. The LSGCD filed an appeal of the TWDB decision in August.

Reiter said the district aims to have a draft of the new groundwater regulations ready for public comment by the end of the summer.

Although the total costs associated with the district’s groundwater management plan appeal were not yet known, Reiter said she believes the district’s financials support its proposed rate decrease next year.

Officials in The Woodlands said they support continuing to move away from groundwater  as a primary source, regardless of whether it is required by regulation, because of the effect it has on local aquifers. Aquifers are underground layers of water-permeable rock that can be used as water sources.

Gordy Bunch, the chairman of The Woodlands Township board of directors, said data suggested the conversion to surface water has already had a positive effect in the region.

“Converting to surface water has actually improved conditions locally with regards to subsidence and faulting,” he said.

Data from the Houston-Galveston Subsidence District shows subsidence leveling off in areas studied after surface water conversion began in 2015.

Subsidence, which has been associated with excessive groundwater withdrawal, was evaluated in the Greater Houston area by a Southern Methodist University study published in June.

According to the WJPA, the study confirmed excessive groundwater production from local aquifers has resulted in water level declines, subsidence and fault movement since 2000.

Turco said satellite mapping has identified areas of water level changes and subsidence concern. In a U.S. Geological Survey map of water altitude changes from 2000-19, declines of up to 200 feet were measured in The Woodlands area. Actual land subsidence in The Woodlands area from the past century was measured at about 2 feet—less than areas farther south in the Greater Houston area, which were measured at up to 10 feet.

“The correlation between withdrawal of underground fluid and the accelerated faulting activities is beyond dispute,” Turco said of the study. “The newly discovered fault activation … in this region appears to be related to excessive groundwater exploitation of the Jasper Aquifer in Montgomery County.”

Bunch said he has personally experienced the effects of fault line activity because a house he owned sustained major damage as a result.

“You don’t have to convince me there’s a correlation between the withdrawal rate and … subsidence because I lived it,” Bunch said. “What needs to occur for this community to understand why does our water cost more—it costs more because if we don’t use surface water we exasperate subsidence. We activate faults that move at a faster speed, and we do a substantial amount of property damage.”

Houston said the SJRA surface water facility will continue to operate despite the uncertain status of regulations.

“We have invested half a billion [dollars] into surface water infrastructure based on those [LSGCD] rules, and now those rules are at least temporarily suspended,” Houston said. “We will continue to run the plant and continue to provide water, because ... the utilities in our business know that we need an alternate supply. We cannot continue to rely solely on groundwater.”

The TWDB has required the LSGCD to submit a new management plan with new objectives and performance standards for groundwater use. The TWDB instructed the district to use similar management goals approved by the other four nearby groundwater districts within Groundwater Management Area 14, which includes 20 nearby Houston-area counties, including Brazoria and Harris.

Turco said regardless of the outcome, long-term cost increases to consumers are inevitable because of the infrastructure costs associated with surface water.

“Many people say the price for the water we’re paying for today is the cheapest water we’re going to buy,” Turco said. “I expect our water to continue to be a precious resource,” Turco said.